All articles from this author
Julia Rosellen


All articles from this author
Eugen Merkul

This article is part of the Thematic Series "Multicomponent reactions".

A novel one-pot four-component synthesis of pyrimidyl- and pyrazolylazulenes through the use of glyoxylation–decarbonylative alkynylation–cyclocondensation sequences starting from azulene or guaiazulene as substrates, gives rise to the formation of the target compounds in moderate to good yields.

Diversity-oriented synthesis has become an important field in organic chemistry, initiated by the increasing demand for new scaffolds for pharmaceuticals and biologically active compounds over the past decades [1-3]. Herein, multicomponent reactions adopt a central position since each component can be varied within a wide range of functionalities and substituents [4-8]. Furthermore, these one-pot processes are highly advantageous because they combine shortened reaction times and resource efficiency with diminished waste production in comparison to traditional multistep syntheses. Thus, they can be considered to be economically and ecologically efficient [9,10].

In particular, multicomponent syntheses of heterocycles initiated by transition metal catalysis received increasing attention in the past decade [11]. As a one-pot synthetic methodology, this novel concept combines the unique reactivity patterns of transition metal catalysis with fundamental organic reactivity, in a sequential or consecutive fashion. Over the years, we have contributed to this concept through Pd/Cu-catalyzed accesses to enones and ynones and the in situ transformation of these intermediates into many classes of heterocycles [12-15]. These novel MCRs nicely correspond with diversity-oriented strategies towards functional organic chromophores [1,2].

The striking blue color of azulene (1a) (from the Spanish word “azul” = blue) has aroused scientific attention for a long time [16,17]. This prominent appearance results from the electronic transition between the S0 and S1 state [18], as a consequence of low energy frontier molecular orbital transitions [19]. The bicyclic structure of this nonbenzoid hydrocarbon results from a five–seven ring annulation with a planar, cyclic conjugation of 10 π-electrons. The dipole moment of 1a at μ = 1.08 D [20] is astoundingly large in comparison to that of naphthalene at μ = 0 D and can be rationalized by a significant contribution of cyclopentadienyl anion/tropylium cation resonance structures (Scheme 1) [19].

Since the elucidation of the structure and the first synthesis of the azulene skeleton by Pfau and Plattner [21,22], its reactivity has been intensively studied [23-26]. The aromatic system is susceptible to nucleophilic addition in the 4-, 6- and 8-positions [23], whereas electrophilic aromatic substitution, such as Friedel–Crafts-type reactions, generally occurs in the 1-position [24]. Interestingly, the azulene motif is also found in terpenoids [27,28]. Guaiazulene (1b) (Scheme 1), a commonly known derivative of azulene (1a), is a naturally occurring sesquiterpene [29]. Guaiazulene (1b) has found entry in a wide range of cosmetic formulations [30]. In addition, numerous azulene derivatives display appealing properties for material [31-33] and pharmaceutical sciences [34-38]. Furthermore, the use of the azulene moiety as part of a protecting group chromophore in carbohydrate chemistry has recently been reported [39].

N-Heteroaryl-substituted azulenes can be accessed by stoichiometric [40,41] as well as Pd-catalyzed cross-coupling processes [42-44]. However, these methods have only delivered a narrow range of derivatives. Prior to application in Pd-catalyzed processes, azulenes must be functionalized, either by halogenation or borylation, and some of these derivatives were found to be quite unstable [45,46]. To the best of our knowledge, no diversity-oriented multicomponent syntheses of azulenyl heterocycles have been reported so far. Here, we report the development of one-pot four-component syntheses toward pyrimidyl- and pyrazolylazulenes.

Recently, we reported a three-component synthesis leading to the formation of ynones by a conceptually novel glyoxylation–decarbonylative Sonogashira coupling sequence (Scheme 2) [47]. The Lewis acid free glyoxylation of electron rich N-heterocycles, such as indoles and pyrroles, leads to the formation of glyoxylyl chlorides, which can be reacted without isolation by decarbonylative Sonogashira coupling to form the desired ynones. So far, only one example of the synthesis of azulenylynones has been described [48].

Previously, glyoxylation of azulene (1a), with oxalyl chloride in 1-position was reported to be essentially complete within 5 min [39]. Oxalyl bromide could be equally used as a glyoxylating agent [49,50]. Likewise, the glyoxylation of 1b has been reported to proceed in 3-position with both reagents, yet with lower reactivity, and its conversion was found to be incomplete even after 2 h. In addition, the formation of side products [51] and decarbonylation [52] was observed, presumably caused by the steric hindrance of the methyl group in 4-position.

Encouraged by our smooth glyoxylation–alkynylation sequences with a variety of unfunctionalized π-nucleophiles, such as pyrazoles, thiophenes, furans, and even the hydrocarbon azulene (1a) [53], we decided to perform optimization studies of the glyoxylation–decarbonylative alkynylation with guaiazulene (1b), a commercially available and inexpensive azulene derivative, and 1-hexyne (2b) as model substrates (Table 1) (for experimental details, see Supporting Information File 1).

With this versatile three-component synthesis of azulenylynones in hand, the stage was set to expand the sequence to a four-component access to pyrimidyl- and pyrazolyl-substituted azulenes. Hence, the conditions for the terminating Michael addition–cyclocondensation step, adopted from a recent work [54], were only slightly adjusted as a consequence of the lower electrophilicity of azulenylynones in comparison to aryl- and heteroaryl-substituted ynones that we have previously synthesized. Therefore, upon the subsequent reaction of the azulenes 1 with oxalyl chloride, followed by Pd/Cu-catalyzed decarbonylative alkynylation with terminal alkynes 2, and finally by cyclocondensation of the ynone intermediates with substituted amidine hydrochlorides 4, pyrimidylazulenes 5 were obtained in moderate to good yields in a one-pot fashion (Scheme 5) (for experimental details, see Supporting Information File 1).

Likewise, pyrazolylazulenes were obtained in the course of a consecutive glyoxylation–decarbonylative Sonogashira coupling, followed by a cyclocondensation with methylhydrazine (6) to furnish two N-methylpyrazoles 7 in moderate yields (Scheme 6) (for experimental details, see Supporting Information File 1).

Attempts to employ phenylhydrazine, N-Boc-hydrazine, and hydrazine hydrate under standard conditions were met with failure. Based upon previous syntheses of N-methylpyrazoles from ynones and methylhydrazine [55,56] and the appearance of a single set of resonances in the proton and carbon NMR spectra, it is obvious that only a single regioisomer was formed. Although the synthesis of similarly substituted pyrazolylazulenes has already been described [57], our one-pot four-component approach utilizes readily available starting materials as well as a simple catalyst system. In addition, it avoids tedious multiple workup and purification operations.

In conclusion, we have developed a one-pot four-component process for the synthesis of novel pyrimidyl- and pyrazolylazulenes. A wide range of substituents can be introduced by this modular approach to N-heterocyclic azulene derivatives. The key step of this diversity-oriented synthesis is the generation of azulenylynones by the glyoxylation–decarbonylative alkynylation sequence with azulene or guaiazulene as substrates. Undoubtedly, this novel four-component approach to heterocyclic derivatives of azulene is well suited for the development of functional chromophores with extended π-conjugation.

© 2011 Gers et al; licensee Beilstein-Institut.
This is an Open Access article under the terms of the Creative Commons Attribution License (http://creativecommons.org/licenses/by/2.0), which permits unrestricted use, distribution, and reproduction in any medium, provided the original work is properly cited.
The license is subject to the Beilstein Journal of Organic Chemistry terms and conditions: (http://www.beilstein-journals.org/bjoc) 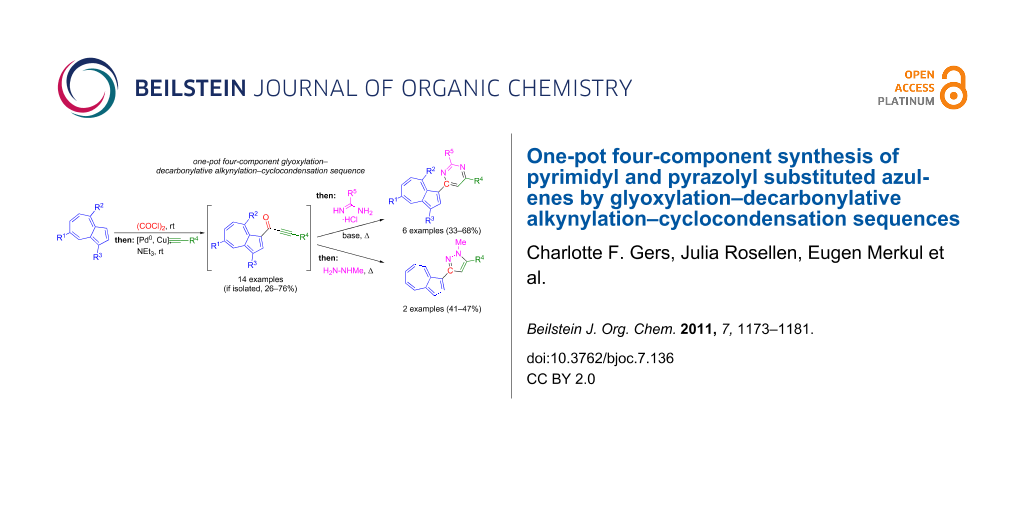