All articles from this author
Dragutin Antovic

This article is part of the Thematic Series "Multicomponent reactions".

Based upon a consecutive one-pot Sonogashira–Glaser coupling–cyclization sequence a variety of 2,5-di(hetero)arylthiophenes were synthesized in moderate to good yields. A single Pd/Cu-catalyst system, without further catalyst addition, and easily available, stable starting materials were used, resulting in a concise and highly efficient route for the synthesis of the title compounds. This novel pseudo five-component synthesis starting from iodo(hetero)arenes is particularly suitable as a direct access to well-defined thiophene oligomers, which are of peculiar interest in materials science.

Over the past decades 2,5-di(hetero)aryl substituted thiophenes [1,2] have constantly attracted a lot of interest, especially as charge-transport materials in electronic [3] and optoelectronic [4-6] devices, but also in drug design as antitumor [7] or anti-inflammatory agents [8] or in plaque imaging [9]. Most commonly the methodological access to these targets has been based upon Pd- or Ni-catalyzed coupling of dihalo thiophenes with organometallic (hetero)aryl derivatives by virtue of Suzuki [10] or Stille [11] coupling. Even though this strategy for the synthesis of symmetrical 2,5-diarylated thiophenes has proven to be efficient and general, all of these synthetic routes share the drawback of ultimately requiring two different halogenated (hetero)arenes and the separate conversion into an organometallic derivative in an additional step. From a practical point of view halogen–metal exchange, transmetalation and isolation occasionally turns out to be tedious and in many cases the use of polar functionality in the substrate is considerably restricted.

In recent years interesting examples of palladium-catalyzed direct C–H activation and arylation of (hetero)aromatics have been reported [12,13]. Although these procedures only employ a single halogenated substrate and avoid the stoichiometric formation of organometallic intermediates the substrate scope is limited to activated heteroaromatic C–H bonds. In addition, sophisticated catalyst systems must be applied, and the efficiency is also variable.

According to this general one-pot access to 1,4-di(hetero)aryl-1,3-butadiynes we reasoned that it should be possible to address the butadiyne functionality towards heterocyclization, again in a one-pot fashion. Here, we communicate the first pseudo five-component synthesis of 2,5-di(hetero)arylthiophenes by virtue of a one-pot Sonogashira–Glaser cyclization sequence.

The conversion of 1,4-diaryl-1,3-butadiynes into 2,5-diarylthiophenes by base-mediated cyclization with sodium sulfide or sodium hydrogen sulfide is a literature-known procedure [16-23]. Therefore, we reasoned that the concatenation of our sequentially Pd/Cu-catalyzed Sonogashira–Glaser reaction [15] with the sulfide-mediated cyclization should lead to a straightforward one-pot pseudo five-component synthesis of 2,5-di(hetero)arylthiophenes (Scheme 2).

We first set out to identify an optimal cosolvent for all four steps taking advantage of the high yield Sonogashira–Glaser coupling synthesis [15] of 1,4-diphenylbutadiyne starting from iodobenzene (1a) (Table 1). In addition, the final cyclization step to give 2,5-diphenylthiophene (2a) was performed under microwave heating at 120 °C for a hold time of 2 h.

aReaction conditions: Iodobenzene (2 mmol) in degassed solvent (10 mL) was reacted for 1.5 h at rt with TMSA (3 mmol) in the presence of PdCl2(PPh3)2 (0.04 mmol), CuI (0.08 mmol), and NEt3 (2 mmol). Then KF (3 mmol) and methanol (5 mL) were added and the reaction mixture was stirred in the open reaction vessel at rt for 16 h. After the addition of Na2S·9H2O (3 mmol) and KOH (3 mmol) the sealed reaction vessel was heated in a microwave oven. bConversion in the final step (monitored by TLC). cGiven yields refer to isolated and purified products. dn. i.: Not isolated. eThe final step was performed in an oil bath at 90 °C for 8 h to achieve complete conversion.

With these optimized conditions in hand, the substrate scope of this novel pseudo five-component synthesis of 2,5-di(hetero)arylthiophenes was studied (Scheme 3). Starting from (hetero)aryl iodide 1 all reactions were carried out on a 2 mmol scale to give symmetrical 2,5-di(hetero)arylthiophenes 2 as stable, crystalline solids (with the exception of 2b) in moderate to good yield (Figure 1). The structural assignments of all thiophenes 2 were unambiguously supported by 1H and 13C NMR spectroscopy, mass spectrometry, and combustion analysis. Due to poor solubility no NMR spectra of compounds 2m, 2n and 2o could be recorded, yet, the assignment of the molecular structure is supported by mass spectrometry and combustion analysis.

The scope of this new one-pot pseudo five-component Sonogashira–Glaser cyclization synthesis of symmetrical 2,5-di(hetero)arylthiophenes 2 is fairly broad with respect to the applied (hetero)aryl iodides 1. The product analysis of the target structures 2 reveals that aryl substituents can be electroneutral (2a and 2l–2n), electron-rich (2b, 2c, 2f, 2k, 2o, 2p) as well as electron-poor (2d, 2e and 2h–2j). Substituents in ortho- (2b), meta- (2c–2g,) and para-positions (2h, 2i) are tolerated. Even bulky bi- or tricyclic substrates are transformed without any complications (2l–2p). Polar substituents such as hydroxy groups (2f) are tolerated as well. Furthermore, several different 5- and 6-membered S- and N-heteroaryl iodides give rise to the formation of the corresponding 2,5-di(heteroaryl)thiophenes (2j–2k and 2o) in good yields.

Deviating from the general procedure, in the case of m-bromo-iodobenzene (1d) only 1 equiv of TMSA was added in order to minimize a second alkynylation at the bromine position in the initial Sonogashira coupling step, which resulted in a moderate yield of the dibromo derivative (2d). Upon reaction of the m-iodo-nitrobenzene (1g) a concomitant reduction of the nitro groups to the amines was observed, giving rise to the dianilino thiophene 2g.

Most interestingly, even the linear five-ring-containing derivatives “PPTPP” (2n) and “T5” (2o), which are important charge-transport molecules in materials science [3], were easily accessed in a one-pot procedure. Starting from the stable and readily available aryliodides 1n and 1o, the presented new methodology allowed the synthesis of both molecules in a quick, simple and economic one-pot reaction. Moreover, the usual preparation and isolation of boronic acids or even more sensitive zinc organometallics was circumvented. In addition the use of the rather expensive diiodothiophene as a coupling partner was avoided [24-26]. “PPTPP” (2n) and “T5” (2o) were readily purified by Soxhlet extraction.

Upon reaction of N-Boc-3-iodoindole (1p) a complete cleavage of the protection group and the formation of several byproducts were observed leading to a significantly lower isolated yield of the corresponding thiophene 2p.

In summary we have developed an economical and efficient one-pot sequence for transforming (hetero)aryl iodides into symmetrical 2,5-di(hetero)arylthiophenes based upon an initial sequentially Pd/Cu-catalyzed Sonogashira–Glaser process followed by a subsequent sulfide-mediated cyclization. A broad range of functional groups is tolerated and the iodo substrates are either commercially available or easily accessible. This strikingly simple methodology is highly practical and leads to a straightforward protocol for the preparation of the title compounds. Studies addressing more-sophisticated 2,5-disubstituted thiophenes for surface modification and also mesoporous hybrid materials are currently underway.

The financial support of this work by the Fonds der Chemischen Industrie is gratefully acknowledged. The authors also thank the BASF SE and Merck Serono for the generous donation of chemicals.

© 2011 Urselmann et al; licensee Beilstein-Institut.
This is an Open Access article under the terms of the Creative Commons Attribution License (http://creativecommons.org/licenses/by/2.0), which permits unrestricted use, distribution, and reproduction in any medium, provided the original work is properly cited.
The license is subject to the Beilstein Journal of Organic Chemistry terms and conditions: (http://www.beilstein-journals.org/bjoc) 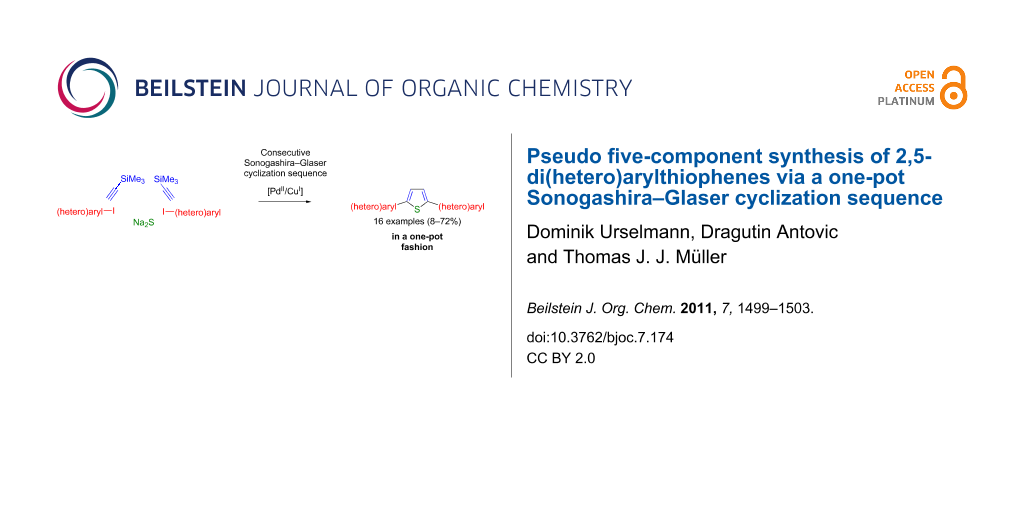