In the search for new ligands for the Ullmann diaryl ether synthesis, permitting the coupling of electron-rich aryl bromides at relatively low temperatures, 56 structurally diverse multidentate ligands were screened in a model system that uses copper iodide in acetonitrile with potassium phosphate as the base. The ligands differed largely in their performance, but no privileged structural class could be identified.

The diaryl ether linkage is a common structural motif encountered in numerous classes of natural products. Moreover, various diaryl ethers have been shown to possess antibacterial, anti-inflammatory, antifungal and herbicidal activity, rendering this compound class attractive for pharmaceutical and agrochemical research [1,2]. Prominent examples of bioactive natural representatives include the glycopeptide antibiotic vancomycin [3,4], the bisbenzylisoquinolines tubocurarine [5] and tetramethylmagnolamine [6], and the antifungal diamine piperazinomycin [7] (Figure 1).

A straightforward method for the formation of diaryl ethers is the Cu-catalyzed coupling of aryl halides with phenols, first reported by Fritz Ullmann in 1903 [8,9]. However, the classical protocol suffers from considerable limitations due to the use of stoichiometric or superstoichiometric amounts of copper powder and typically requires high reaction temperatures (≈200 °C), thus tolerating only a limited number of functional groups. Alternatively, C–O bond formation can be accomplished by efficient Pd-catalyzed arylations of phenols developed by Buchwald [10,11] and Hartwig [12,13] in the 1990s. Nevertheless, the use of this expensive metal in combination with sensitive and costly phosphine ligands limits the use of palladium catalysis for industrial-scale applications and economic aspects have led to a renaissance of the Cu-catalyzed reaction in recent years [14]. It is known that certain additives, such as N,N- and N,O-chelating ligands, accelerate the Ullmann diaryl ether synthesis and permit a considerable reduction of the reaction temperature [15-17]. Successful approaches towards a mild coupling were, e.g., developed by Taillefer and Buchwald in 2003 and 2004 who used multidentate ligands and a 5–10 mol % catalyst loading at 90–110 °C [18-20]. However, the majority of ligands reported in the literature to date exhibit a limited substrate scope, and application of the methodology to more complex molecules is still challenging.

For the synthesis of alkaloids containing the diaryl ether linkage, we searched for efficient ligands for the Ullmann coupling of electron-rich aryl bromides as the substrates and performed a ligand screening using the model system 4-bromoanisole/4-methoxyphenol. To the best of our knowledge, this represents the most diverse ligand set investigated for a similar purpose so far [21].

A set of 56 multidentate ligands with different chelating functionalities and bite angles, belonging to the structural classes of amino acids, acetic acid derivatives, phosphinites, phosphonates, imines, diimines, oximes, oxime ethers and diketones were selected for the screening (Figure 2). Several of these compounds have been employed in diaryl ether syntheses before [22-24].

As a starting point, N,N-dimethylglycine (L1) introduced by Ma et al. [22,25] in combination with copper iodide as the Cu-source was chosen, as this ligand has been successfully applied by us in a synthesis of two dimeric benzylisoquinoline alkaloids [26]. This model system was optimized with respect to the influence of different bases, molecular sieves, solvents, and temperatures (Table 1).

It turned out that caesium carbonate as a base without addition of molecular sieves did not result in any diaryl ether formation, presumably due to the formation of water inactivating the base. With chemical drying agents such as magnesium sulfate, only trace amounts of the product were obtained. In contrast, potassium phosphate proved to be a more suitable base for diaryl ether formation and did not require the addition of molecular sieves. After screening of different solvents, the combination of copper(I) iodide (10 mol %), N,N-dimethylglycine L1 (10 mol %) as the ligand, potassium phosphate (2.0 equiv) as the base and acetonitrile as solvent (80 °C) was identified as an efficient system for the coupling of the above-mentioned starting materials (1.0 mmol each in 0.6 mL). Although the substrate conversion in acetonitrile at 80 °C was lower than in toluene at 110 °C (Table 1, entries 5 and 7), acetonitrile was selected as the solvent for the ligand screening in order to be able to compare ligands that give higher conversions than L1 and to get a better impression of the respective reaction rates. The substrate conversion of the screening reactions was monitored and determined by 1H NMR spectroscopy at specific time intervals (2 h 15 min and 24 h).

In the short-term screening, promising results were obtained with N,P-chelating phosphinite ligands such as L19 and L20, amino acid-derived N,O-ligands such as L2 and L3 and N,O- and N,N-ligands with a rigid backbone such as 8-aminoquinoline (L44) and 8-hydroxyquinoline (L47) (Table 2 and Figure 3). These ligands have been reported to be effective in the Cu-catalyzed diaryl ether synthesis before [21,27-29].

A disadvantage of ligands with free amino or hydroxy groups, such as L44, is that they themselves can act as substrates in the Ullmann-type coupling, which may result in the formation of undesired side products and a loss in catalyst performance. To avoid this complication, the N,N-dimethylated derivative L43 was synthesized and turned out to exhibit an improved catalytic activity compared to L44. Since L1 showed high catalytic activity, its 2,2-dimethylated analogue L5 and the structurally related pyrrolidino- and piperidinoacetic acids L9 and L15 were tested, but even these minor modifications of the ligand structure led to a drastically decreased catalytic activity.

Interestingly, not only the N,P-chelating phosphinite ligands L19 and L20 but also the N,O-chelating phosphonate ligand L21 showed a significant catalytic activity. From the group of diimine ligands, L28 [30] gave the best results. It should be noted that also in this class, structurally related ligands showed drastically different catalytic activities in the screening, as can be seen by comparison of L28, L32, and L33. Furthermore, oxime ethers, which, to the best of our knowledge, represent a new class of ligands for Ullmann-type couplings, were also screened in the model reaction. All tested oxime ethers and oximes showed catalytic activity, although the substrate conversion was lower compared to the amino acid-derived ligands. The catalytic activities of the oximes did not, however, differ from those of the oxime ethers. On the other hand, the salicyl aldehyde-derived oxime ether and oxime ligands [31] showed only poor substrate conversions in comparison to other classes of multidentate ligands. L48 also proved to possess a high catalytic activity, which is consistent with the results reported by Beller et al. [32] who used the ligand for the synthesis of various diaryl ethers. In the short-term screening, none of the tested ligands showed a higher substrate conversion than L1 did.

The most promising ligands of the short-term screening were subsequently subjected to a long-term screening (24 h) to examine their thermal and chemical stability (Table 3, Figure 3).

In the long-term screening the ligands L2, L43 and L48 showed promising results since their substrate conversions were only slightly lower than that of L1, which again was unsurpassed. The phosphinite ligands L19 and L20, which showed comparable catalytic activities to L2, L43 and L48 in the short-term screening, in comparison gave lower substrate conversions in the long-term screening. This decrease of catalytic activity may be due to oxidation and subsequent hydrolysis of the air- and water-sensitive phosphinites to their corresponding phosphinic acids and 8-hydroxyquinoline (L47), which showed a comparable catalytic activity. It was found that the conversion within a specific time interval decreased over time stronger than anticipated, and finally the reaction ceased. The stagnation may be due to the formation of traces of water in the reaction mixture or formation of a catalytically less active copper(I)–bromide complex from liberated bromide ions. Another alternative may be the decomposition of the ligands.

A collection of 56 multidentate ligands were screened in a model system for the Ullmann diaryl ether synthesis of electron-rich phenols and aryl bromides. Structurally diverse ligands showed a catalytic activity in the coupling, but none of the ligands showed a higher catalytic activity than N,N-dimethylglycine (L1). In the long-term screening, the ligands L2, L43 and L48 were found to exhibit only slightly lower catalytic activity than L1 in the model reaction. In conclusion, N-methylated amino acid-derived N,O-ligands, N,N-ligands with small bite angles, and N-butylimidazole proved to be the most efficient ligands for Ullmann diaryl ether formation under the tested conditions. The synthesized phosphinite-type P,N-ligands derived from 8-hydroxyquinoline performed well in the short-term screening but lost catalytic activity over time. While active ligands were found in various structural classes, even relatively small variations of the efficient ligands can lead to a dramatic loss of catalytic activity, which complicates their rational optimization. In general, strongly chelating ligands with four coordinating atoms should be avoided. Coordination of the copper atom by one N- and one N- or O-atom may be a desirable structural motif for the design of new ligands. Remarkably, published ligands used for other C-heteroatom bond-formation reactions showed unexpected low activity in our system.

General procedure for model reactions of the ligand screening

© 2012 Otto and Opatz; licensee Beilstein-Institut.
This is an Open Access article under the terms of the Creative Commons Attribution License (http://creativecommons.org/licenses/by/2.0), which permits unrestricted use, distribution, and reproduction in any medium, provided the original work is properly cited.
The license is subject to the Beilstein Journal of Organic Chemistry terms and conditions: (http://www.beilstein-journals.org/bjoc) 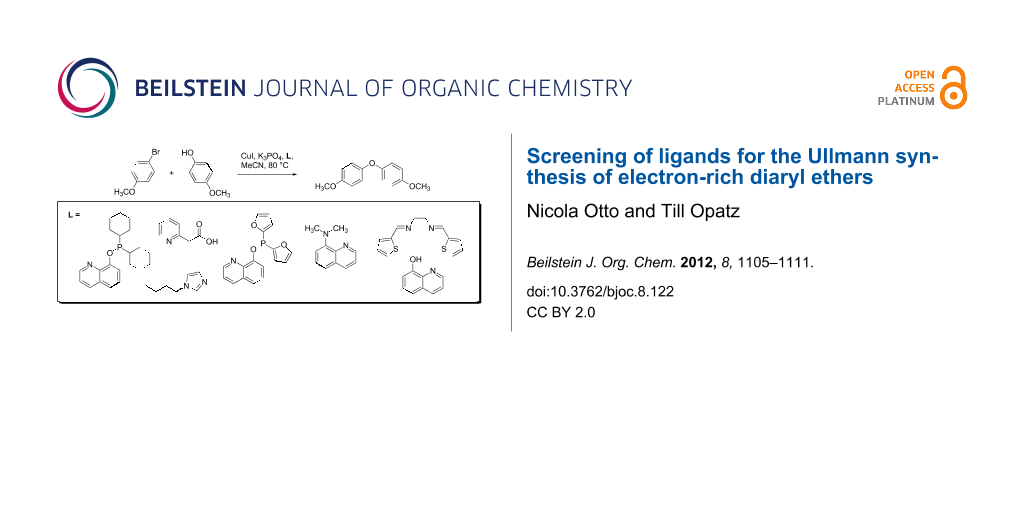