All articles from this author
Yongtai Zheng


All articles from this author
Akira Harada

The interaction of β- and γ-cyclodextrins (β-CD and γ-CD, respectively) with polyacrylamide modified with pyrenyl (Py) residues (pAAmPy) was investigated in a mixed solvent of water and dimethyl sulfoxide (DMSO) by steady-state fluorescence. In the absence of CD, the fluorescence spectra indicated that the formation of Py dimers became less favorable with increasing volume fraction of DMSO (xDMSO). The fluorescence spectra at varying xDMSO and CD concentrations indicated that β-CD and γ-CD included monomeric and dimeric Py residues, respectively. Using the fluorescence spectra, equilibrium constants of the formation of Py dimers and the complexation of β-CD and γ-CD with Py residues were roughly estimated based on simplified equilibrium schemes.

Cyclodextrins (CDs) are cyclic oligomers composed of glucopyranose units linked through α-1,4-glycoside bonding. They bear a tapered structure with a narrower rim of primary hydroxy groups and a wider rim of secondary hydroxy groups. CDs of 6, 7, and 8 glucopyranose units are called α-CD, β-CD, and γ-CD, respectively. CDs have a hydrophilic exterior and a rather hydrophobic cavity, and thus, recognize guest compounds of a size and shape matching their cavity, to form inclusion complexes [1-5]. Since CDs are nontoxic, they have been utilized in a variety of fields, including food additives, cosmetics, and personal care items [6-12]. In the past decade, the formation of inclusion complexes of CDs with guest residues attached on water-soluble polymers has attracted increasing interest from a number of research groups because these systems are applicable to stimuli-responsive systems [13-18].

We have been working on the interaction of CDs with water-soluble polymers bearing various guest residues, including linear, branched, and cyclic aliphatics, as well as aromatics [19-21], and realized stimuli-responsive hydrogels [22-27] and macroscopic assemblies based on molecular recognition [28-31]. Aromatic residues absorb light to become excited, and subsequently they can transfer energy and electrons. The interaction of CDs with water-soluble polymers carrying aromatic residues may allow one to construct functional systems that convert photo energy based on molecular recognition. Among aromatic compounds, pyrene is the most examined as a fluorescence probe or label because it shows a relatively high fluorescence quantum yield and a relatively long fluorescence lifetime in both monomer and excimer states [32,33]. Since pyrene is very hydrophobic, it may tend to form aggregates, e.g., dimers, in aqueous solutions. It is also known that pyrene forms inclusion complexes with β-CD and γ-CD in different manners; β-CD includes monomeric pyrene whereas γ-CD includes dimeric pyrene [34-36]. Recently, we have demonstrated this selectivity switching on macroscopic molecular recognition for polyacrylamide-based gels carrying pyrenyl (Py) and CD residues, by changing the composition of a mixed solvent of water and dimethyl sulfoxide (DMSO) [37]. In the present study, the interaction of β-CD and γ-CD with Py-modified polyacrylamide (pAAmPy, Scheme 1) was investigated in the water/DMSO mixed solvent of varying composition by steady-state fluorescence to elucidate the mechanism of the selectivity switching.

Figure 1a demonstrates the steady-state fluorescence spectra measured for 0.04 g L−1 pAAmPy (5 μM in Py residue) at varying volume fractions of DMSO (xDMSO) in the water/DMSO mixed solvent in the absence of CD. At xDMSO = 0 (i.e., in water), the spectrum exhibits not only emission bands ascribable to monomeric Py in the region of 370–430 nm, but also a broad band assignable to a Py excimer around 480 nm, indicating that Py residues tend to form dimers because of the hydrophobicity. It is likely that Py residues associate intramolecularly under the dilute conditions (0.04 g L−1) in this study. These spectra indicate that the intensity of excimer fluorescence decreases whereas that of monomer fluorescence increases with increasing xDMSO. This observation indicates that the formation of Py dimer becomes less favorable, because the Py residue becomes more solvophilic with xDMSO. Using the spectra, the ratios (I480/I376) of the intensities at 480 and 376 nm, which are predominantly due to the Py excimer and monomer, respectively, were calculated and plotted in Figure 1b against xDMSO. I480/I376 decreases monotonously from 0.125 to 0.025 with increasing xDMSO from 0 to 1.

Detailed study of the equilibria of the inclusion complex formation of CDs with Py-modified water-soluble polymers, including the formation of the dynamic excimer, requires not only steady-state fluorescence measurements but also time-resolved fluorescence measurements [38-43]. In this study, however, equilibrium constants are roughly estimated by analyzing the steady-state fluorescence data, assuming that dynamic excimer formation is negligible. In the absence of CD, I480/I376 for pAAmPy decreases from 0.125 to 0.025 with increasing xDMSO from 0 to 1. It should be noted here that the fluorescence of the Py monomer is dominant compared to that of the Py excimer even at xDMSO = 0 (i.e., in water), implying that there are a significant fraction of Py residues (Py°) that cannot form Py dimers (Py2). Since the steady-state fluorescence measurements were performed under dilute conditions in this study, most of the Py2 were formed intramolecularly. Thus, Py residues in pAAmPy carrying a Py residue may not form Py2. The fraction of Py° is defined as f. Scheme 2a indicates a simplified equilibrium of the formation of Py2 from two Py residues. On the basis of the derivation of equations in the Supporting Information File 1, the equilibrium constant for the Py2 formation (KPy) can be calculated as

where [Py]0 is the total concentration of Py residue and x as given in Equation 2.

In the β-CD/pAAmPy system, β-CD forms inclusion complexes with both Py and Py° (Scheme 2b). On the basis of the derivation described in the Supporting Information File 1, the concentrations of all species can be calculated by using the equilibrium constant (Kβ) for the inclusion complex formation, and I480/I376 can be also obtained as given in Equation 3.

In the γ-CD/pAAmPy system, γ-CD forms inclusion complexes with Py2, in which Py° is not involved. On the basis of the derivation described in the Supporting Information File 1, the concentrations of all species can be calculated by using the equilibrium constant (Kγ) for the inclusion complex formation, and I480/I376 can be also obtained as given in Equation 4.

It should be noted here that the values of KPy, Kβ, and Kγ were estimated rather qualitatively based on the simplified equilibria and a number of assumptions, but the Kβ and Kγ values are in good agreement with the values reported for pyrene (4.9 × 102 and 1.1 × 103 M−1 for β-CD and γ-CD, respectively) [44].

The polymer (pAAmPy) was prepared by radical copolymerization of AAm and APy using APS as the initiator. A predetermined amount of AAm and APy were dissolved in DMF. After purging with dry argon for 30 min, APS (3 mg, 13 μmol) was added to the monomer solution. The reaction mixture was placed into a cuvette equipped with a stirrer and sealed. The cuvette was warmed with an oil bath thermostated at 60 °C overnight. The reaction mixture was poured into an excess of methanol to give a precipitate. The polymer obtained was recovered by filtration and dried under vacuum. The molecular weight of the polymer was estimated to be 4 × 103 by size exclusion chromatography (SEC), and the Py content was determined to be ca. 1 mol % by 1H NMR.

Steady-state fluorescence spectra were obtained on a HITACHI F-2500 spectrophotometer with excitation at 335 nm by using a 1 cm quartz cuvette. The slit widths for both excitation and emission sides were kept at 2.5 nm during measurement. SEC analysis was carried out at 40 °C on a TOSOH CCP & 8020 system equipped with two TOSOH TSKgel α-M columns connected in series, using formamide as the eluent at a flow rate of 0.3 mL min−1. TOSOH UV-8020 and TOSOH RI-8021 detectors were used. The molecular weights were calibrated by polystyrene sulfonate sodium-salt samples (American Polymer Standards). 1H NMR spectra were measured on a JEOL JNM-ECA500 spectrometer by using a mixed solvent of DMSO-d6 and D2O (1/1, v/v) as a solvent, and chemical shifts were referenced to the solvent value (i.e., 2.49 ppm for DMSO).

© 2012 Hashidzume et al; licensee Beilstein-Institut.
This is an Open Access article under the terms of the Creative Commons Attribution License (http://creativecommons.org/licenses/by/2.0), which permits unrestricted use, distribution, and reproduction in any medium, provided the original work is properly cited.
The license is subject to the Beilstein Journal of Organic Chemistry terms and conditions: (http://www.beilstein-journals.org/bjoc) 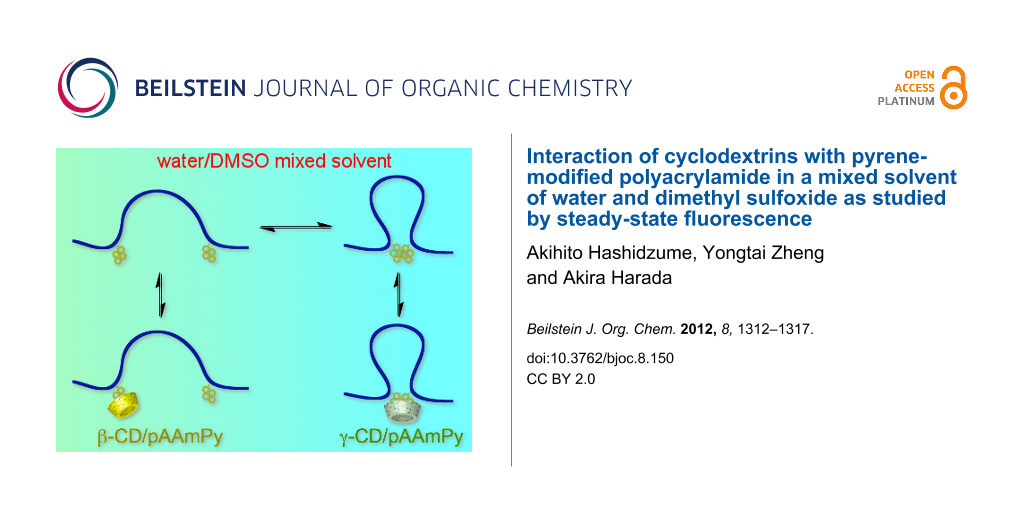