All articles from this author
William Tam

Iridium-catalyzed intramolecular [4 + 2] cycloadditions of diene-tethered alkynyl halides were investigated by using [IrCl(cod)]2 as catalyst, and dppe was found to be the most suitable phosphine ligand for the reaction. No oxidative insertion of the iridium into the carbon–halide bond was observed, and the reactions proceeded to provide the halogenated cycloadducts in good yield (75–94%). These results are the first examples of cycloadditions of alkynyl halides using an iridium catalyst.

Transition-metal-catalyzed (TMC) [4 + 2] cycloadditions are an efficient way of making 6-membered rings, particularly in the case of electronically similar dienes and dienophiles, which can require high temperatures and long reaction times for the thermal cycloaddition to occur [28]. Many different transition-metal catalysts have been described for these types of reactions, employing a variety of different metals including Ni [29], Co [30], Rh [31-34], Pd [35,36] and Ir [26,27]. Much research has been done on intramolecular TMC [4 + 2] cycloadditions of a variety of diene-tethered alkynes to form substituted bicyclic products 2 (Scheme 1); however, the majority of these examples demonstrate Y = alkyl or aryl, and R = methyl. An interesting variation on this reaction is to utilize diene-tethered alkynyl halides (Y = halogen) in order to form a halogenated bicyclic product.

Alkynyl halides are a versatile moiety in organic synthesis, and can be prepared under mild conditions [37]. They can be seen as a dual functionalized molecule in TMC reactions, with the two main modes of reactivity proceeding by insertion of a metal into the carbon–halide bond (Scheme 2, type 1), or coordination of the π-system of the acetylene to the metal in a η2 fashion (Scheme 2, type 2). The most extensive studies done on alkynyl halides in TMC reactions are on cross-coupling reactions that proceed by oxidative insertion of the metal into the carbon–halide bond (type 1), and these types of reactions have been used to synthesize building blocks, such as enynes [38,39], diynes [40,41], and triynes [42-44]. Conversely, formation of intermediate 5 is rare, likely due to competition with oxidative insertion of the metal into the carbon–halide bond; however, there are reported cases of Co-catalyzed [2 + 2 + 1] [45], Ru-catalyzed [2 + 2] [46], and Rh-catalyzed [4 + 2] [33] cycloadditions that proceed via intermediate 5.

To the best of our knowledge, there are no known Ir-catalyzed [4 + 2] cycloadditions involving alkynyl halides. In this article, we report our studies on [IrCl(cod)]2/dppe-catalyzed intramolecular [4 + 2] cycloadditions of diene-tethered alkynyl halides. In order to begin the study, alkynyl bromide 1a was synthesized as previously described [33], and several different catalytic iridium systems were screened (Table 1).

Initial attempts were undertaken by using the catalyst system described by Shibata [26] employing Vaska’s complex in toluene (Table 1, entries 1 and 2) and cycloadduct 2a was formed in good yield; however, the formation of the aromatized product 6 was also observed. Addition of the silver(I) salt AgSbF6 to the commercially available [IrCl(cod)]2 was attempted in order to generate the cationic Ir(I) species (Table 1, entries 3 and 4), but this resulted in decomposition of the starting material, both at room temperature and at 90 °C. A variety of phosphine ligands were screened in conjunction with [IrCl(cod)]2 [16,26], and these provided low to moderate yields of 2a, with little to no formation of the aromatized cycloadduct 6 (Table 1, entries 5–8). Using racemic BINAP and PPh3 ligands also provided 2 in low yield, but a significant amount of 6 was also formed. From these observations, [IrCl(cod)]2 (2 mol %) and dppe (4 mol %) were carried forward, and a variety of solvents were screened at different temperatures in an attempt to further optimize the cycloaddition for cycloadduct 2a (Table 2).

Employing nonpolar solvents 1,4-dioxane and 1,2-dichloroethane (Table 2, entries 2 and 3) provided very similar results to toluene, and the lower-boiling-point solvent acetone (Table 2, entry 4) was ineffective when heated to 45 °C. High-boiling-point, polar aprotic solvents NMP, DMSO, and DMF (Table 2, entries 5, 7, 9) all improved the yield of 2a when the reaction was run at 90 °C, with DMSO being the most effective. Attempts to lower the reaction temperature by using NMP and DMSO (Table 2, entries 6 and 8) as the solvent resulted in incomplete reaction after 3 h, so the most efficient reaction conditions for the intramolecular [4 + 2] cycloaddition of diene-tethered alkynyl bromide 1a were found to be [IrCl(COD)]2 (2 mol %), dppe (4 mol %) in DMSO at 90 ºC.

In order to illustrate the general applicability of this catalytic system, a variety of diene-tethered alkynyl halides were synthesized, including three previously unreported substrates 1c, 1e, and 1g (Table 3). Alcohol 8 was prepared in two steps from tiglic aldehyde (7) as described by Gilbertson [47], and dienynes 9 and 11 could be synthesized from 8 (Scheme 3). Deprotonation of 8 with sodium hydride, followed by trapping with propargyl bromide provided 9 in 60% yield, and a Mitsunobu reaction between 8 and sulfonamide 10 (prepared as per reference [47]) provided 11 in 74% yield. Bromination of 9 and 11 provided diene-tethered alkynyl halides 1c (57%) and 1e (83%), respectively.

Synthesis of substrate 1g commenced with deprotonation of diethyl malonate, followed by addition of mesylate 12, and subsequent deprotonation and addition of propargyl bromide as described by Gilbertson [31] to provide dieneyne 13 (Scheme 4). Diene 13 was then treated under the standard bromination conditions to provide 1g in 77% yield.

Compounds 1a–1g were then subjected to the optimized cycloaddition conditions (Table 3). In general, the Ir-catalyzed [4 + 2] cycloadditions occurred smoothly for all substrates, forming bicyclic products 2 in good yield (75–94%) (Table 3), and in each case a single stereoisomer was formed, with the H at the ring junction and the R group anti to each other. The stereochemistry of the cycloadducts was assigned by comparison with spectral data from previous work. This stereochemistry is consistent with that of previously reported intramolecular [4 + 2] cycloadditions in which the relative stereochemistry was assigned by X-ray diffraction analysis [32] or GOESY NMR [33]. For both alkynyl bromide 1a and alkynyl chloride 1b (Table 3, entries 1 and 2) the reaction went to completion quite quickly; however, a decreased yield was seen in the cycloaddition of 1b. Attempts at the cycloaddition with the analogous alkynyl iodide provided a complex mixture of products. Changing R1 = H to R1 = Me (compare entries 1 and 3, Table 3) increased the reaction time slightly to 4 h, and a lower yield was seen for the cycloaddition of 1c. A similar trend was seen for the nitrogen-tethered substrates (Table 3, entries 4 and 5) when changing R1 = H to R1 = Me, as the reaction time increased from 3 to 4 h and the yield decreased slightly. The all-carbon tethered substrates (Table 3, entries 6 and 7) required longer reaction times, but the cycloadditions occurred in good yields. Changing R = H to R = Me had little effect on the yield (Table 3, entries 6 and 7).

Attempts at the cycloaddition reaction with substrates bearing a 4-atom tether were unsuccessful (Scheme 5). Two different substrates were synthesized and submitted to the optimized reaction conditions, but only the starting material was recovered. Changing the reaction conditions to the original system of Vaska’s complex in toluene (conditions B, Scheme 5) did not change this result. The previous Ir-catalyzed [4 + 2] cycloaddition work by Shibata and co-workers did not include any examples of similar substrates [26]; however, previous work in our group has shown that Rh-catalyzed [4 + 2] cycloadditions of this type of substrate occur in good yield [33].

These cycloadducts 2 are interesting due to the retention of the halogen in the cycloaddition reaction. This opens up the possibility of further coupling reactions to gain access to complex bicyclic molecules that would not be accessible directly by cycloaddition. Previous work has demonstrated this synthetic utility by the further functionalization of 2a by Pd-catalyzed Suzuki and Heck coupling reactions [33]. In theory any of the cycloadducts 2 could undergo similar transformations, making them valuable intermediates that can be easily extended by metal-catalyzed coupling reactions.

This work was supported by the Merck Frosst Centre for Therapeutic Research, and the Natural Sciences and Engineering Research Council of Canada (NSERC).

© 2012 Tigchelaar and Tam; licensee Beilstein-Institut.
This is an Open Access article under the terms of the Creative Commons Attribution License (http://creativecommons.org/licenses/by/2.0), which permits unrestricted use, distribution, and reproduction in any medium, provided the original work is properly cited.
The license is subject to the Beilstein Journal of Organic Chemistry terms and conditions: (http://www.beilstein-journals.org/bjoc) 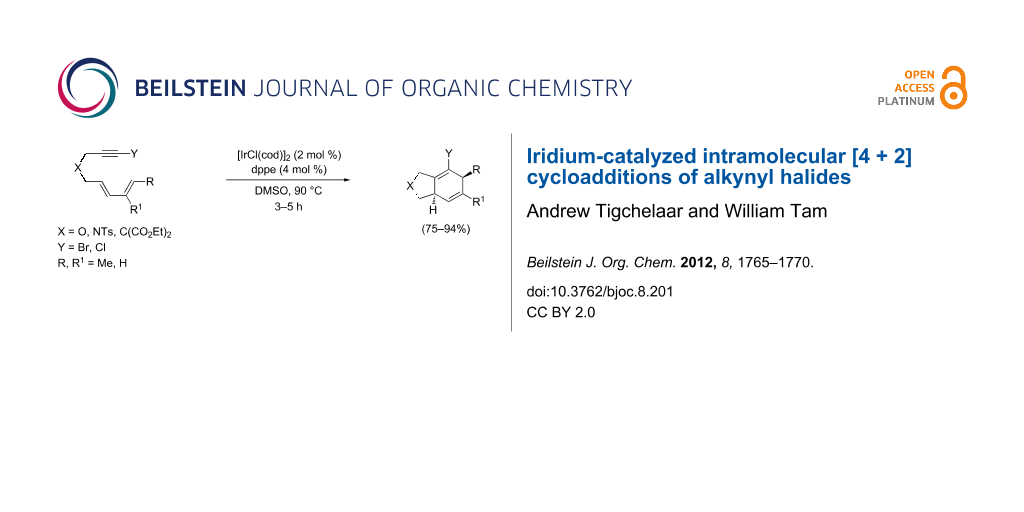