Bromination of hydrocarbons with CBr4, initiated by light-emitting diode irradiation


All articles from this author
Bunsho Ohtani


All articles from this author
Kotaro Kikushima

The bromination of hydrocarbons with CBr4 as a bromine source, induced by light-emitting diode (LED) irradiation, has been developed. Monobromides were synthesized with high efficiency without the need for any additives, catalysts, heating, or inert conditions. Action and absorption spectra suggest that CBr4 absorbs light to give active species for the bromination. The generation of CHBr3 was confirmed by NMR spectroscopy and GC–MS spectrometry analysis, indicating that the present bromination involves the homolytic cleavage of a C–Br bond in CBr4 followed by radical abstraction of a hydrogen atom from a hydrocarbon.

Bromination reactions of organic compounds are fundamental reactions for providing a wide variety of organic precursors for industrial materials [1-8]. Generally, the bromination of saturated hydrocarbons proceeds through radical abstraction of hydrogen atoms and trapping with bromide, whereas the bromination reactions of aromatic and unsaturated hydrocarbons are induced by electrophilic addition of bromine and/or a cationic bromide. Combinations of N-bromosuccinimide (NBS) with azobisisobutyronitrile or benzoyl peroxide as radical initiators are typical conditions for Wohl–Ziegler bromination [9-12] and are widely used for the bromination of benzylic and allylic positions, despite the need for heating and the generation of equimolar amounts of waste. To avoid these drawbacks, several efforts have been focused on benzylic bromination using Br2 or bromide salts as highly efficient bromine sources [13-17]. However, the direct bromination of non-activated C–H bonds is still a challenging task. Although Br2 [13], CBr4 [18-20], R4NBr [21,22] and LiBr [23] have been reported to serve as bromine sources for the bromination of saturated hydrocarbons, these reactions exhibit low selectivity or reactivity. Efficient bromination using Br2 as a bromine source combined with a stoichiometric base [24], an excess of MnO2 [25], or a catalytic amount of Li2MnO3 [26] has been reported to give high reactivity and selectivity. The combination of CBr4 with a copper catalyst at high temperature also achieves effective bromination of hydrocarbons [27].

We have focused on CBr4, which is solid and easy to handle, as a bromine source. CBr4 has been used in organic synthesis to give useful bromide-containing precursors. For instance, alkyl alcohols can be converted to alkyl bromides in the presence of CBr4 and triphenylphosphine; this is known as the Appel reaction [28]. This combination can also be used to transform aldehydes into dibromoalkenes, which are useful precursors for the Corey–Fuchs reaction [29], to obtain terminal alkynes. Although CBr4 has been used for various bromination reactions including radical brominations, these reactions need further additives to proceed. Here, we disclose the efficient bromination of saturated hydrocarbons, using CBr4 as a bromine source without any additives, through radical reactions induced by irradiation with light from commonly used light-emitting diodes (LEDs) [30]. In this reaction, additives, catalysts, heating, and inert reaction conditions are all unnecessary.

aConditions: 1.0 mL of cyclohexane, bromination sources, under LED irradiation, rt. bYields were determined by GC analysis based on the mole of CBr4. cIn the presence of 0.10 mL water. dUnder Ar.

To investigate the wavelength dependency of the present reaction, the action spectrum of the bromination of cyclohexane in the presence of CBr4 was obtained by plotting the apparent quantum efficiency against wavelength (Figure 1, red line) [31]. It was found that the present reaction was promoted by irradiation with ultraviolet (UV) light and deactivated under visible-light (>475 nm) irradiation. CBr4 shows strong absorption in the UV region (Figure 1, blue line), and this overlaps with the above-mentioned action spectrum. The activation of CBr4 is therefore considered to be induced by photo-irradiation, initiating the reaction. Although other light sources could also activate CBr4, we adopted LED light due to safety, mildness, and availability. We have confirmed that fluorescent room light could also promote the reaction.

To examine the above hypothesis, the bromination of cyclohexane was monitored using 13C NMR spectroscopy (Figure 2). CBr4 (0.50 mmol) dissolved in cyclohexane (0.10 mL) and CDCl3 (0.40 mL) was observed at −29.7 ppm (Figure 2a). After stirring a reaction mixture of CBr4 (0.50 mmol) and cyclohexane (0.10 mL) under LED irradiation for 24 h, peaks assigned to bromocyclohexane (53.4, 37.6, 25.9, and 25.1 ppm) and another strong peak at 9.6 ppm appeared (Figure 2c). The latter peak was found to be consistent with the peak of CHBr3 (0.50 mmol) dissolved in cyclohexane (0.10 mL) and CDCl3 (0.40 mL) (Figure 2b). Additionally, the generation of CHBr3 in the present bromination was confirmed by 1H NMR spectroscopy and GC–MS spectrometry. These results support the reaction pathway described above, although the chemical species after the second bromination was not assigned at this point.

In conclusion, we have developed a method for the hydrocarbon bromination induced by LED irradiation using CBr4 as a bromine source. The present reaction system did not require any additives, catalysts, heating, or inert conditions, and is therefore an extremely simple procedure. An action spectrum and NMR measurements showed that the LED irradiation activates CBr4 to generate bromine radicals, which initiate the bromination reaction. Further elucidation of the detailed mechanism and the use of LED irradiation in other reaction systems are under investigation in our laboratory.

All commercially available compounds were purchased and used as received. Cyclohexane, cyclooctane, n-hexane, and toluene were purchased from Wako Pure Chemical Industries and used as received. 1H (400 MHz) and 13C (100 MHz) NMR spectra were recorded using a JEOL JNM-LA400 spectrometer. Proton chemical shifts are reported relative to residual solvent peak of CDCl3 at δ 7.26 ppm. Carbon chemical shifts are reported relative to CDCl3 at δ 77.00 ppm. Gas chromatographic analysis was conducted with Shimadzu GC-2014 equipped with FID detector. The chemical yields were determined using dodecane as an internal standard. The NMR data of all brominated products match those reported.

General procedure for the bromination induced by LED irradiation

A reaction tube was charged with CBr4 (66.33 mg, 0.20 mmol) and a hydrocarbon (1.0 mL). The reaction mixture was stirred under white LED (7 W) irradiation. To this was added dodecane (45.2 μL, 0.20 mmol) and the yield was determined by GC analysis with dodecane as an internal standard.

Financial support for this study was provided by the Development of Human Resources in Science and Technology, The Circle for the Promotion of Science and Engineering, and the Cooperative Research Program of Catalysis Research Center, Hokkaido University (Grant #11B2001). We also received generous support from Mr. Junya Miyata, Mr. Ryota Watanabe, and Dr. Tomoka Kawase on this research.

© 2013 Nishina et al; licensee Beilstein-Institut.
This is an Open Access article under the terms of the Creative Commons Attribution License (http://creativecommons.org/licenses/by/2.0), which permits unrestricted use, distribution, and reproduction in any medium, provided the original work is properly cited.
The license is subject to the Beilstein Journal of Organic Chemistry terms and conditions: (http://www.beilstein-journals.org/bjoc) 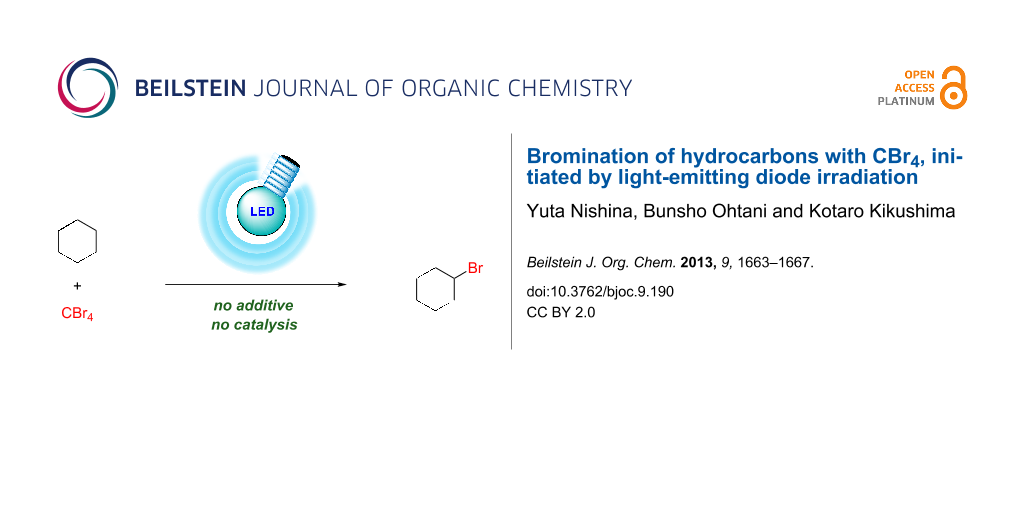