All articles from this author
Michael Dos Santos


All articles from this author
Guillaume Bernadat


All articles from this author
Danièle Bonnet-Delpon


All articles from this author
Benoit Crousse

2-Isoxazolines are five-membered heterocyclic compounds that have been widely applied in medicinal and organic chemistry. This nucleus is frequently found in natural products [1-4], bioactive molecules [5,6] (Figure 1) and can be used as bioisosteric transformations of amide bonds in order to provide metabolically stable and more active derivatives [7-11]. Moreover, 2-isoxazolines can be cleaved under various conditions to supply a variety of organic functionalities including γ-amino alcohols [12], β-amino acids [13], β-hydroxy ketones [14,15] and β-hydroxy nitriles [14,15].

Fluorinated compounds play a central role in different branches of chemistry [16]. The incorporation of a fluorine atom into bioactive molecules causes remarkable changes of their physicochemical properties, which allows the development of substances with improved pharmacological characteristics. Some examples are the synthesis of modified amino acids and peptides, carbohydrates, natural products and the development of more selective enzyme inhibitors [17-21]. Another powerful area, yet a somewhat less utilised role for fluorine is as a tag for 19F NMR that offers several analytical advantages including speed, sensitivity and selectivity [22,23]. Fluorinated molecules have served as valuable 19F NMR probes in high-throughput screening, drug metabolism and protein binding experiments as well as in assessing gene expression [24].

Nevertheless, the preparation of 3-trifluoromethyl-2-isoxazolines 1 has not been extensively studied so far. In the literature only a few examples of the preparation of these derivatives through a multistep procedure are described (Scheme 1) [25]. Initially, trifluoromethyl aldoxime 2 is halogenated to give a volatile trifluoroacetohydroxymoyl chloride or bromide 3, which is usually isolated in low yields. Reaction of intermediate 3 with a base provides trifluoroacetonitrile oxide 4, which can be reacted with olefins (such as styrene, allyl derivatives, etc.) through a 1,3-dipolar cycloaddition to give the desired product. Therefore, the development of a straightforward and mild general procedure to access these valuable derivatives remains of great importance. In the present work, we describe a simple and efficient metal-free protocol for the oxidation of trifluoromethyl aldoxime 2 into trifluoroacetonitrile oxide 4 and a one-pot synthesis of 1 through in situ cyclization of 4 with different dipolarophiles (Scheme 1).

Initially, another procedure for the preparation of the trifluoroacetaldehyde oxime 2 was developed. In a previous work [25], 2 was obtained as an etherate complex from the reaction between 2,2,2-trifluoroethane-1,1-diol (TFAL) and hydroxylamine hydrochloride. In our work, reaction of TFAL and an aqueous solution of hydroxylamine (50 wt %) yielded the desired product, which was isolated as a complex of two molecules of aldoxime with one molecule of water after distillation in 70–80% yield (Scheme 2).

In the recent literature, different conditions have been developed for the direct oxidation of aldoximes [26-31]. Recently, commercially available reagents have been employed under metal-free conditions. A group [27] reported that the hypervalent iodine reagents (diacetoxyiodo)benzene (DIB) and phenyliodine bis(trifluoroacetate) (PIFA) could successfully promote the oxidation of aldoximes to the corresponding nitrile oxide. Those reagents exhibit potent oxidizing properties, comparable to heavy-metal reagents, but with several advantages such as low toxicity, high availability and the possibility to be utilized under mild conditions [32]. Then, we decided to verify their applicability in the oxidation of 2 despite the presence of water. We first screened different oxidative reagents and conditions for the oxidation step and allylbenzene (5a) was chosen as dipolarophile. Our studies for this process are summarized in Table 1.

When DIB was used with triethylamine (TEA) and methanol as solvent, the formation of a complex mixture was observed (Table 1, entry 1). This is probably due to the nucleophilic addition of methanol to the highly electrophilic trifluoroacetonitrile oxide. The utilization of the less nucleophilic alcohol hexafluoroisopropanol (HFIP) [33,34] led to the formation of a complex mixture (Table 1, entry 2). The oxidation of 2 with PIFA in CH2Cl2 afforded the product in only 16% yield (Table 1, entry 4). Better results were obtained by employing DIB in CH2Cl2 as solvent, after which the product could be isolated in an acceptable yield (55%, Table 1, entry 3). [Bis(acetoxy)iodo]benzene (DIB) is a weaker oxidant than PIFA. When the oxidation is carried out with DIB, weak acetic acid instead of strong trifluoroacetic acid is liberated, and the decomposition of the oxazolines is avoided.

Faced with the moderate yield of 1a, we followed the reaction by using 19F NMR. The measurement of the crude mixture with 19F NMR revealed the presence of a side product and despite the total consumption of the aldoxime, a small amount of allylbenzene remained. It is known that nitrile oxides can dimerize or isomerize to yield different products, such as furoxans, isocyanates, 1,2,4-oxadiazoles and 1,4,2,5-dioxadiazines (Figure 2).

We thus postulated that a competition between the cycloaddition reaction and the dimerization or isomerization pathways could occur. Aiming to confirm our hypothesis we carried out the reaction without the presence of allylbenzene. After 12 h, 2 was completely consumed with the exclusive formation of the previously observed side product. However, attempts to isolate this product failed due to its high volatility. It was therefore co-distilled with CH2Cl2 and the resulted solution was analyzed by 19F NMR coupled and decoupled with proton, 19F,19F-COSY and 19F,19F-NOESY (see Supporting Information File 1). Data confirmed the formation of bis(trifluoromethyl)furoxan 6 (Figure 3) already synthesized by Middleton [35].

Considering that the best results were reached utilizing DIB and CH2Cl2 as solvent, these conditions were selected for further optimizations. After several investigations, we could verify that employing two equivalents of aldoxime 2 and two equivalents of DIB led to complete conversion of the starting olefin. The product could be isolated in good yield (76%, see below in Table 2, entry 1). We can note here that water complexed with 2 did not alter the reaction rate.

Having optimized reagents and conditions, the scope of the reaction was explored with regard to the substrates (Table 2). As observed in the earliest works [11], the cycloaddition of 4 with terminal olefins led to the corresponding 3-trifluoromethyl-5-substituted-2-isoxazoline 1 with complete regioselectivity. No trace of the regioisomer 3-trifluoromethyl-4-substituted-2-isoxazoline could be detected even when yields of cycloadducts were low. From functionalized olefins such as NH–Cbz and NH–Boc allylamines the desired product could be isolated in excellent yields (90% and 91%, respectively, Table 2, entries 2 and 3). Interestingly, the protecting groups were not cleaved, which indicated that reaction conditions are very mild. With allyltrimethylsilane oxazoline 1g was obtained in good yield (82%). From ester and acid derivatives of undecen, isoxazolines were obtained in good yields too (64% and 51%, respectively, Table 2, entries 4 and 5). With para-bromostyrene isoxazoline 1f was obtained in 56% yield. On the other hand, a good yield was reached for disubstituted olefin 5h (Table 2, entry 8). However a complete lack of reactivity was observed for the reaction with the electron-poor olefins 5i, 5j and 5k (Table 2, entries 9–11). The reaction was also carried out with alkynes, providing 3-trifluoromethyl-5-substituted-isoxazoles. Moderate yields were obtained for the reaction with phenylacetylene (5l) and trimethylsilylacetylene (5m, Table 2, entries 12 and 13). However, the electron poor alkyne 5n was unreactive towards trifluoroacetonitrile oxide 4.

1,3-Dipolar cycloaddition reactions have been studied from the theoretical standpoint since the 1970’s onwards [36,37] with an ever-increasing accuracy as computational methods evolved [38]. Assuming that the above-mentioned transformations occur via a concerted mechanism, we decided to perform electronic structure calculations at the B3LYP/6-31G* level in order to further understand the reactivity of the different unsaturated compounds studied in this work against trifluoroacetonitrile oxide 4 (See Supporting Information File 1) [39-43]. Upon energy minimization, a structure with a geometry close to linearity was found for trifluoroacetonitrile oxide (Figure 4), which is consistent with earlier findings [44].

Comparison of the energy gaps between the frontier molecular orbital levels of the nitrile oxide and those of the alkene partners (Figure 5) suggest that type-III cycloaddition reactions (where the dipole reacts via its LUMO and the dipolarophile via its HOMO) take place for every combination of reactants reported herein [45].

With only a single regioisomer being isolated, we also considered the coefficients (Table 3) and shapes (Figure 4) of frontier molecular orbitals. This data is compatible with the observed regioselectivity [37]. Steric factors can also exert notable influence, but they would guide regioselectivity in the same direction.

aColumns Ca and Cb contain coefficients for C and O.

In a subsequent step, we decided to preliminarily study the ring opening reaction of the 3-trifluoromethyl-2-isoxazolines in order to prepare the corresponding trifluoromethylated γ-amino alcohols. The major and almost the only route to synthesize these amino alcohols is the reduction of β-aminocarbonyl compounds prepared from Mannich-type reactions [46-48]. The ring opening of 2-methyl-3-trifluoromethylisoxazolines by utilizing H2 and Raney-Ni as catalysts was described by Tanaka and co-workers [49]. However, this methodology is restricted to the synthesis of N-methylated amino alcohols. Instead we investigated the reduction and the ring opening of 3-trifluoromethyl-2-isoxazolines 1a and 1b in the presence of NaBH4 and NiCl2 as additives [50]. Under these conditions, a total conversion of the starting material was observed by 19F NMR, and products 7a and 7b were obtained in moderate yields. However the diastereoisomeric excess was very poor (10% de). The results are reported in Table 4.

R.S.B.G thanks the FAPERJ, CNPq, the Marie Curie program, the Farmaguinhos/FioCruz, and PGQu for financial support. Central Glass Co. Ltd. is gratefully acknowledged for kindly providing fluoral hydrate and HFIP, as well as the IT department from Université Paris-Sud for providing computing resources. The authors would like thank M’bokeno Gomes Lowa, Erasmus student. We also thank the French Fluorine Network (GIS Fluor).

© 2013 Gonçalves et al; licensee Beilstein-Institut.
This is an Open Access article under the terms of the Creative Commons Attribution License (http://creativecommons.org/licenses/by/2.0), which permits unrestricted use, distribution, and reproduction in any medium, provided the original work is properly cited.
The license is subject to the Beilstein Journal of Organic Chemistry terms and conditions: (http://www.beilstein-journals.org/bjoc) 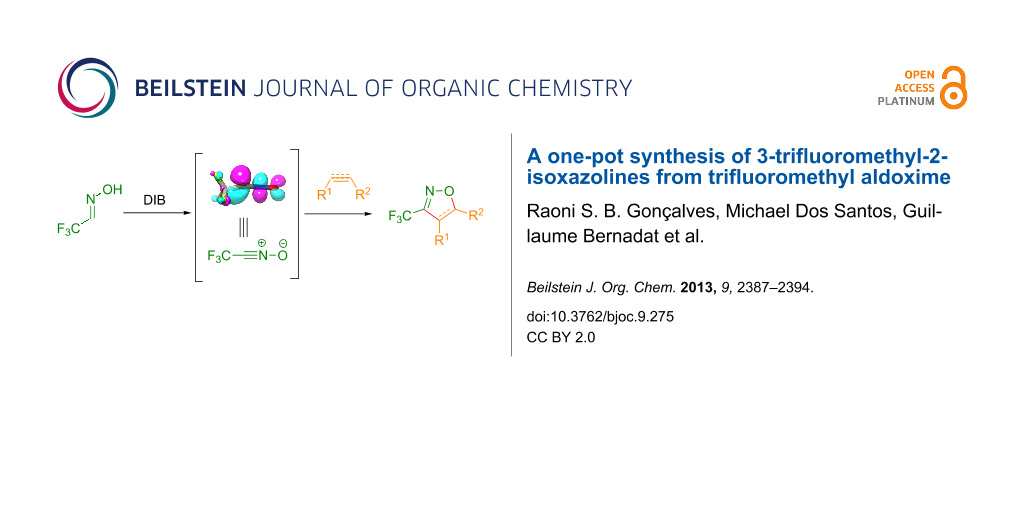