All articles from this author
Jin-Hong Lin


All articles from this author
Cheng-Pan Zhang


All articles from this author
Ji-Chang Xiao


All articles from this author
Xing Zheng

An efficient method for the copper-catalyzed trifluoromethylation of terminal alkenes with an electrophilic trifluoromethylating reagent has been developed. The reactions proceeded smoothly to give trifluoromethylated alkenes in good to excellent yields. The results provided a versatile approach for the construction of Cvinyl–CF3 bonds without using prefunctionalized substrates.

With the optimized reaction conditions in hand (Table 1, entry 21), we then explored the substrate scope of the Cu(I)-catalyzed trifluoromethylation of terminal alkenes with Togni’s reagent. As shown in Figure 1, the reaction could tolerate various functional groups. It is worth mentioning that all of the products were obtained with excellent stereoselectivity (E/Z >97/3), determined by 19F NMR. Substrates with an electron-donating group were converted smoothly into the desired products in excellent yields (2a–2f). Irrespective of the position of the bromine substituent on the aryl ring, the reaction proceeded very well to afford the desired products in excellent yields (2g–2i). Stronger electron-withdrawing groups showed some negative effect on the reaction, as exemplified by the poor results of substrates with other halides, carbonyl or nitro groups on the benzene ring (2j–2m). Heteroaromatic alkenes were also investigated (2n and 2o). As previously seen, alkene 1n endowed with an electron-rich heteroaromatic group led to a good result (2n) and an electron-deficient substrate resulted in low yield (2o).

With regard to the reaction mechanism, it is reasonable to conceive a pathway involving radical species according to previous reports [47-50]. To gain more insight into the mechanism, further evidence was collected. 2,2,6,6-Tetramethyl-1-piperidinyloxy (TEMPO), a well-known radical scavenger, was added to the reaction of 4-vinylbiphenyl with Togni’s reagent (III) in the presence of [(MeCN)4Cu]PF6. It was found that the desired trifluoromethylation was completely suppressed, which suggested that the transformation involved a radical process. Based on the above results, we proposed the mechanism as outlined in Scheme 3. Initially, the activation of III by Cu(I) led to the formation of radical intermediate A. Decomposition of this intermediate produces ((2-(2-iodophenyl)propan-2-yl)oxy)copper(II) (C) and a CF3 radical, which is trapped by alkenes to form the trifluoromethylated radical intermediate B. Subsequently, the radical intermediate B is oxidized by Cu(II) (C) to the cation intermediate D with simultaneous release of catalyst Cu(I). In the presence of base, intermediate D readily undergoes hydrogen elimination to give the final product.

In conclusion, we have described the copper-catalyzed trifluoromethylation of alkenes with Togni’s reagent under mild conditions. The results presented here provided a versatile approach for the construction of Cvinyl–CF3 bonds without using prefunctionalized substrates. Investigations on the application of the trifluoromethylation method to the synthesis of pharmaceuticals and agrochemicals are currently underway. 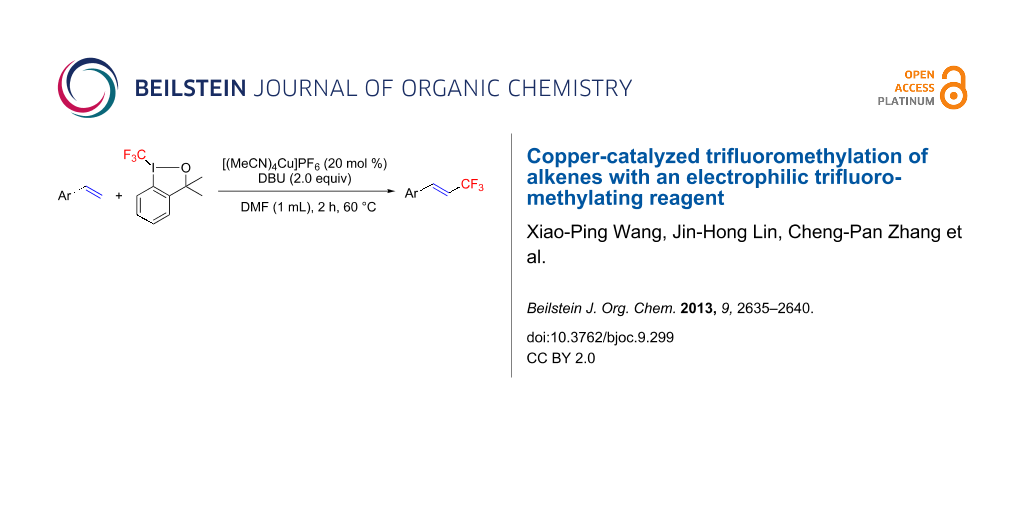