All articles from this author
Taisuke Ishikawa


All articles from this author
Takahiko Akiyama

The trifluoromethylation of iodoarenes was accomplished by use of a 2-trifluoromethylbenzimidazoline derivative as the trifluoromethylating reagent and a catalytic amount of Cu(I) in the presence of 2,2'-bipyridyl as the ligand. Through a mechanistic study, we found that the oxidative addition of the iodoarene to the Cu(I)–CF3 species is the rate-determining step.

We next screened for 2,2’-bipyridyl ligands to be used with CuI (Table 2). 4,4’-Dimethyl-2,2’-bipyridyl (4b) gave product 3a in a higher yield than 2,2’-bipyridyl (4a), whereas 5,5’- and 6,6’-dimethylbipyridyl (4c and 4d) were not effective. From these results, the substituents at 4,4’-positions were expected to be beneficial for the reaction, and other 4,4’-substituted bipyridyl ligands were investigated. We found that 4,4’-di-tert-butyl-2,2’-bipyridyl (4e) afforded the best result (91% yield). On the other hand, 2,2'-bipyridyl ligands bearing electron-donating (–OMe, 4f) and -withdrawing (–CF3, 4g) groups furnished 3a in low yields. Moreover, other electron-withdrawing ligands, i.e., phenanthroline derivatives (4h and 4i), and electron-donating ligands such as 2,2’-biimidazole (4j) and tetramethylethylenediamine (4k) gave inferior results.

We next screened for the generality of the reaction towards various substrates under the optimized conditions (Figure 2). Electron-deficient aryl iodides were well tolerated furnishing the corresponding trifluoromethylation products in high yields. Among the tested nitrophenyl derivatives, p- and o-nitrophenyliodide gave the products in highest yields. In contrast, m-iodonitrobenzene afforded the trifluoromethylated product in a decreased yield of 35% due to the higher electron density of the meta-position compared to the ortho- and para-positions. Iodoarenes bearing other electron-withdrawing substituents, such as p-cyano, p-acetyl, and p-methoxycarbonyl, were also suitable and gave products 3d–f in moderate to high yields. Furthermore, the presence of a formyl group was also tolerated in the reaction, and p-formyltrifluoromethylbenzene (3g) was obtained in 40% yield. However, the electron-rich substrate 2-methoxyiodobenzene (1h) gave product 3h in only a modest yield (30%).

Finally, a mechanistic study of the reaction was carried out. First, the active species of the reaction was investigated by NMR analysis. The generation of Cu(I)–CF3 was observed by mixing benzimidazoline 2 and CuI in EtCN at 90 °C (Figure S1, in Supporting Information File 1). Therefore, CuI and 2 generated CuCF3 species as the active species for the trifluoromethylation [24].

Then, the dependence of the conversion on the reaction time was estimated (Figure 4) and no induction period was observed. Although benzimidazoline 2 was completely consumed after 24 h, the yield of the trifluoromethylation product continued to increase up to 48 h. This suggests that product generation proceeded slower than the cleavage of the C–CF3 bond of benzimidazoline.

We propose a mechanism for the reaction, as shown in Figure 5. The Cu(I)–CF3 species, generated through the reaction of benzimidazoline 2 with CuI under basic conditions, underwent an oxidative addition reaction with the aryl iodide to generate a Cu(III) complex. A subsequent reductive elimination furnished the trifluoromethylarene and Cu(I). Because an electron-donating ligand was more effective than an electron-deficient one (Table 2), and the reaction with benzimidazoline proceeded rapidly (Figure 4), the oxidative addition was suggested to be the rate-determining step.

© 2020 Uchikura et al.; licensee Beilstein-Institut.
This is an Open Access article under the terms of the Creative Commons Attribution License (https://creativecommons.org/licenses/by/4.0). Please note that the reuse, redistribution and reproduction in particular requires that the authors and source are credited.
The license is subject to the Beilstein Journal of Organic Chemistry terms and conditions: (https://www.beilstein-journals.org/bjoc) 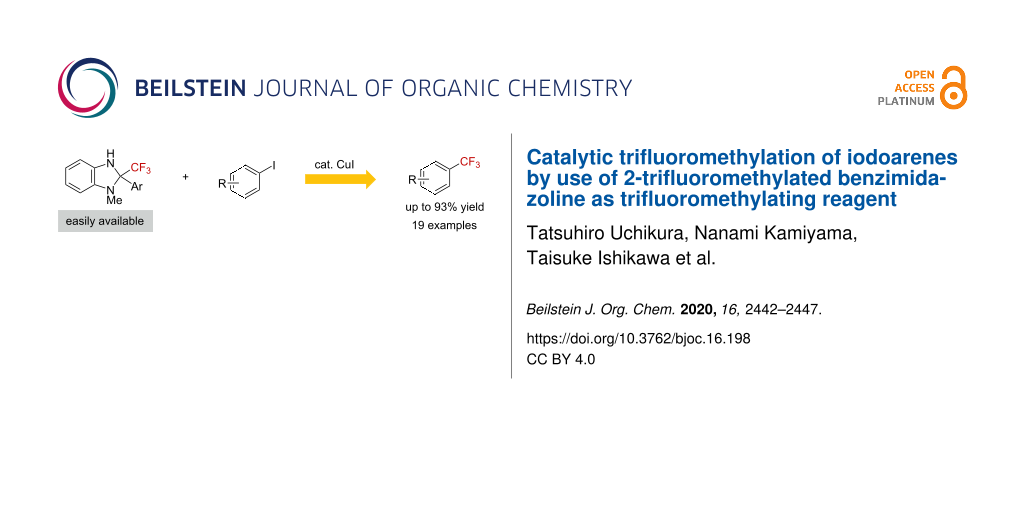