All articles from this author
Sintu Ganai

Retrosynthetic analysis of the RSV inhibitors 5 and 6 relied on benzothiadiazine-3-one 1,1-dioxide 7, which can easily be obtained by simple hydrolysis of the benzothiadiazine 1,1-dioxide derivative 8. Construction of this six-membered sultam 8 was thought to be achieved by intramolecular aza-Wittig reaction of the o-azido derivative 9. The following retrosynthetic analysis led us to the starting material o-azidobenzenesulfonic acid (11) for the synthesis of the intermediate 10 necessary for the synthesis of RSV inhibitors (Scheme 1).

Sulfonic acid 11 bearing an o-azido group [30] was converted into the corresponding sulfonyl chloride by treatment with oxalyl chloride followed by the reaction with appropriate amines to give the requisite 2-azido-N-substituted benzenesulfonamides 10a–i. The sulfonamide 10b was reacted with ethyl carbonochloridate to afford the corresponding amide derivative 9b required for our study. Initially, we turned our attention to the synthesis of a benzothiadiazine 1,1-dioxide derivative using substrate 9b by intramolecular aza-Wittig reaction. To test this premise, 9b was treated with triphenylphosphine in THF at room temperature, but no desired product was obtained, and only the intermediate iminophosphorane 12b was isolated, even under reflux (Scheme 2).

We next conducted a series of reactions with the replacement of the solvent THF by other solvents, such as toluene, CH2Cl2, and CH3CN, but none of them afforded any cyclized product (Table 1, entries 2–4,). Then the reaction conditions were modified through the use of a higher-boiling-point solvent, i.e., o-dichlorobenzene (DCB). The reaction was successful at higher temperature, affording the desired cyclized product 13b (54%) along with the by-product triphenylphosphine oxide (Table 1, entry 5).

aAll the reactions were carried out with 1 equiv 9b and 1.5 equiv PPh3; bisolated yields of 13b; conly 12b was separated.

aAll the reactions were carried out with 1 equiv 10b, 1.5 equiv ClCO2Et, 2 equiv base, and 1.5 equiv PPh3; bisolated yields of 13b; ca smaller amount of 13b was isolated than the major product 14b.

It is notable that xylene appears to be a suitable solvent for this reaction. We then carried out the reactions with a variety of substrates 10a–i under the optimized conditions (ethyl carbonochloridate, PPh3, Et3N, xylene at 135 °C) in order to generalize the method, and the results are summarized in Table 3. The reactions of all the substrates having electron-deficient R-substituents at the 2-position proceeded smoothly, providing excellent yields, whereas the substrates having electron-donating R-substituents gave lower yields.

Previously, Jung and Khazi [52] reported the synthesis of the benzothiadiazine 1,1-dioxide moiety from the reaction of o-aminobenzenesulfonamide with the costlier triphosgene, whereas in our case the synthesis of benzothiadiazine 1,1-dioxide derivatives was achieved from o-azidobenzenesulfonamides and required cheaper ethyl carbonochloridate as the reagent.

© 2013 Majumdar and Ganai; licensee Beilstein-Institut.
This is an Open Access article under the terms of the Creative Commons Attribution License (http://creativecommons.org/licenses/by/2.0), which permits unrestricted use, distribution, and reproduction in any medium, provided the original work is properly cited.
The license is subject to the Beilstein Journal of Organic Chemistry terms and conditions: (http://www.beilstein-journals.org/bjoc) 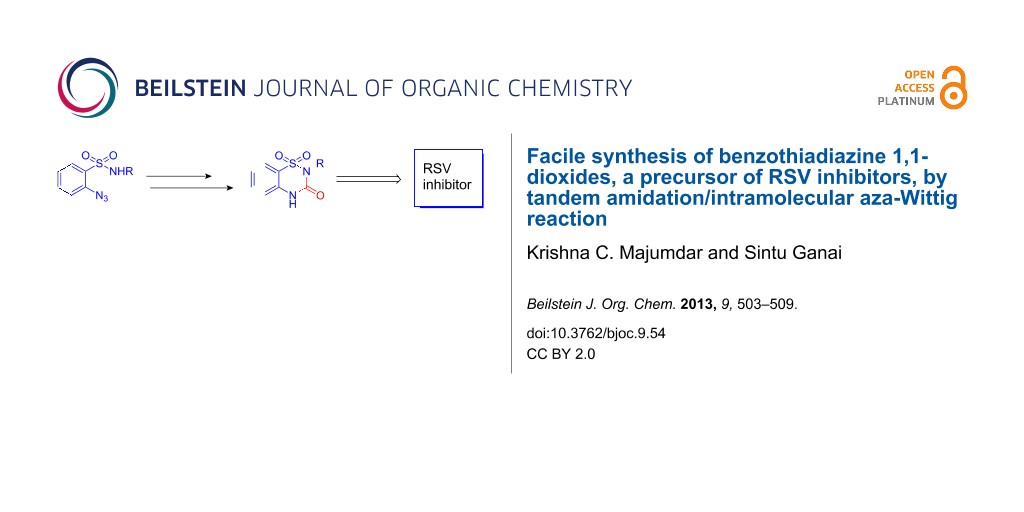