All articles from this author
Morgane Pasco


All articles from this author
Helena Chechik


All articles from this author
Ilan Marek

The carbocupration reactions of heterosubstituted alkynes allow the regio- and stereoselective formation of vinyl organometallic species. N-Alkynylamides (ynamides) are particularly useful substrates for the highly regioselective carbocupration reaction, as they lead to the stereodefined formation of vinylcopper species geminated to the amide moiety. The latter species are involved in numerous synthetically useful transformations leading to valuable building blocks in organic synthesis. Here we describe in full the results of our studies related to the carbometallation reactions of N-alkynylamides.

Due to a strong differentiation of electron density on the two sp-hybridized carbon atoms, N-alkynylamides (ynamides) have become attractive substrates involved in many synthetically useful transformations [1-4]. The remarkable renaissance of N-substituted alkynes in synthesis is primarily due to the combination of the easy and straightforward access to these compounds with their notable stability [5-7]. A rather large variety of synthetic approaches have been therefore developed in the last decade that allow ynamides to be of easy access to the whole synthetic community [8-14]. Similarly, enamides are another important class of substrates involved in numerous applications in organic synthesis [5,15]. As one of the most straightforward and well-developed methods to generate polysubstituted alkenes is the carbometallation reaction of alkynes [16-18], ynamide should be a suitable substrate for the regio- and stereoselective synthesis of enamide through carbometallation reaction [19-22]. Although the stereoselectivity of the carbocupration is usually controlled through a syn-addition of the organocopper reagent on the triple bond [23], the regioselectivity is dependent on the nature of the α-substituent on the alkyne 1. The presence of a donor substituent (XR = OR, NR2, Path B, Scheme 1) leads generally to the β-isomer in which the copper atom adds to the carbon β of the heteroatom [16,17], whereas an acceptor substituent (XR = SR, SOR, SO2R, SiMe3, PR2, P(O)R2, Path A, Scheme 1) would preferably give the α-isomer [16,17] (copper geminated to the heteroatom, Scheme 1). Although N-substituted alkynes are known to give the β-isomer, we thought that a precomplexation of the organometallic species (i.e., copper) with a polar functional group in the vicinity of the reactive center should be able to reverse the regioselectivity of the carbometallation, as we have shown for the carbocupration of ethynyl carbamate (XR = OCONR2, Path C, Scheme 1) [24].

Herein we describe our results for the regio- and stereoselective carbometallation reaction of N-alkynylsulfonyl amides and various N-alkynylcarbamates [25].

Our initial experiments were directed towards the carbometallation reaction of N-alkynylsulfonylamides, as the coordination of the organometallic species by the sulfonyl group should control the regioselectivity of the carbometallation reaction in favor of the α-isomer. When 2 was added to an organocopper (easily prepared by the addition of one equivalent of R2MgBr to one equivalent of CuBr in Et2O at −50 °C), the carbometalated products 3 were obtained in good isolated yields after hydrolysis (Scheme 2, conditions A and Table 1, entries 1–3). Some of these results were published as a preliminary note in [25].

The reaction proceeds smoothly for classical primary alkylcopper species (Table 1, entry 1), but for groups that are known to be sluggish in carbocupration reaction, such as the introduction of a Me group (Table 1, entry 2), yield is significantly lower. The presence of the vinylcopper was proved by the reaction with allyl bromide as a classical electrophile used in organocopper chemistry to give 3c (Table 1, entry 3). Although N-heterosubstituted alkynes were used in all cases, the α-isomer is regioselectively obtained, as confirmed by 1H NMR analysis of the crude reaction mixture after hydrolysis, through an intramolecular chelation between the N-sulfonamide moiety and the organocopper species. To improve the chemical yield of this transformation, we considered the copper-catalyzed carbomagnesiation reaction. However, such catalytic reaction requires a transmetallation reaction of the intermediate vinylcopper into vinylmagnesium halide, and due to the intramolecular chelation, it is usually performed at higher temperature. Thus, a thermally more stable organocopper species [formed from copper(I) bromide–dimethylsulfide complex (CuBr·Me2S)], was used for this copper-catalyzed carbomagnesiation reaction. We were pleased to see that the reaction is very efficient for the addition of BuMgBr, as 3a was obtained in 90% yield as a unique α-isomer. More importantly, the copper-catalyzed methylmagnesiation now proceeded in good yield to lead to the carbometalated product 3b in 70% yield after hydrolysis (Table 1, entry 5) [25,26].

As the carbocupration of an N-alkynylsulfonamide could be easily achieved, we were interested to see whether such a carbocupration reaction could be extended to ynamide 4 bearing an acyclic carbamate moiety. We were pleased to find that this reaction could also be performed on N-alkynylcarbamate 4 with primary and secondary alkylcopper species (still obtained in diethyl ether from 1.0 equiv of a Grignard reagent and 1.0 equiv of CuBr, conditions A) to give the corresponding vinylcopper intermediate 5. Simple hydrolysis led to the enamide 6a,c in good isolated yields after purification by column chromatography (Scheme 3 and Table 2, entries 1 and 3). The vinylcopper species could also be successfully trapped at low temperature with allylbromide to give the functionalized adduct 6b (Scheme 3, Table 2, entry 2) [25]. The addition of the Me and Ph groups proceeds more easily on the N-alkynylamide 4 than N-alkynylsulfonamide 2 as yields could reach 68 and 84%, respectively (Table 2, entries 8 and 9). Yield could be further improved when CuBr·Me2S was used as the copper source (Table 2, compare entries 1 and 6) [25]. In all cases, the expected α-isomer of 6 was exclusively formed and the regiochemistry was determined by NOE (nuclear Overhauser effect) between the methyl substituent and the corresponding vinylic proton (E = H, Table 2, entry 4). However, such selectivity can only be achieved in nonpolar solvent, such as Et2O, since the same reaction performed in THF leads mainly to the formation of the β-isomer in a α/β ratio of 18:82.

aConditions A: 2.0 equiv of R2Cu (prepared from equimolar amount of R2MgBr and CuBr at −50 °C to rt in Et2O. Conditions B: 2.0 equiv R2MgBr with 10 mol % of CuI in Et2O from −30 °C to rt. bYields of isolated product after flash column chromatography (based on 4). cCuBr·Me2S complex was used as a copper source.

When N-alkynylamide 4 was treated under our copper-catalyzed carbomagnesiation conditions (conditions B), enamides 6 were similarly obtained as a pure α-isomer. Although this transformation requires higher temperature, yields are usually better than in reactions with the preformed organocopper species (Table 2, entries 7–10) [25].

Recently, our group was particularly interested in the carbometallation reaction of ynamides bearing chiral cyclic carbamates 7, particularly the Evans's oxazolidinone [27], as vinylmetal species could subsequently react with a large variety of electrophiles leading to diastereomerically enriched functionalized adducts [28-30]. Thus, the carbometallation reaction of N-alkynylamide 7 was performed with several organometallic species as described in Scheme 4 and Table 3.

Our initial attempt was performed with organocopper species prepared from alkylmagnesium halide and CuBr (1:1 ratio) and ynamide 7a (R1 = Hex), which cleanly led to the enamide 9a in very good isolated yield for the addition of MeCu, and with excellent regioselectivities (α/β > 95:5, Table 3, entry 1). For subsequent reaction of 8Cu, we were also interested in evaluating the regioselectivity of the carbometallation reaction of an organocuprate, and we were pleased to see that the same α-regioisomer was obtained. However, yields are lower with CuI and CuBr (Table 3, entries 2 and 3) than that with a more soluble complex CuBr·Me2S (Table 3, entry 5). However, when CuCN was employed, only an α/β ratio of 9:1 was obtained, probably due to the decreased chelating effect of the resulting mixed organometallic species (Table 3, entry 4). When the copper-catalyzed carbomagnesiation reaction was performed (Table 3, entry 6), results were very similar to those from the addition of copper or cuprate reagents (Table 3, entries 1 and 5, respectively).

Thus, the best compromise we found for the regioselective addition of a methyl group on ynamides 7a and 7b was through the addition of a cuprate Me2CuLi·Me2S prepared from the addition of methyllithium (2 equiv) to Me2S·CuBr (1 equiv). These experimental conditions were used for the stereo- and regioselective carbocupration of several functionalized ynamides 7c–g. With a TIPS-protected alcohol 7c (Table 3, entry 7), the carbocupration gave only the α-regioisomer, albeit in moderate yield. On the other hand, in the presence of the 1-adamantylester substituted substrate 7d, the two α/β-isomers were formed in a 8:2 ratio (Table 3, entry 8). This loss of selectivity may be explained either by a competitive chelation of the carbonyl group of the ester functionality or the presence of THF (ca. 20 vol %) as a co-solvent used to dissolve the starting ynamide 7d. When the reaction was performed with aryl-substituted ynamides (7e–g), THF had to be added as a co-solvent to improve the solubility of the starting materials as well, which may affect the resulting selectivity. Indeed, in the case of phenylsubstituted ynamine 7e, a 1:1 mixture of Et2O and THF was used to avoid precipitation of the starting material, which led to a 9:1 ratio in favor of the α-isomer (Table 3, entry 9). However, for substrates bearing p-fluoro and p-methoxyphenyl substituents (7f and 7g respectively), only around 8 vol % of THF was necessary to add to the reaction mixture to obtain a homogeneous solution. In such circumstances, the α-adduct was detected as the sole product of the carbocupration (Table 1, entries 10 and 11) as confirmed by NMR spectroscopy and X-ray crystallographic analysis of the major isomer of 9f (Figure 1).

In the past few years we have witnessed the renaissance of the selective functionalization of heterosubstituted alkynes. From the pioneering work of Alexakis, Cahiez and Normant, which led to a myriad of beautiful selective transformations of alkynes, the carbocupration reaction is again at the center of interest but this time for the regioselective addition of organocopper derivatives to various ynamide species. Particularly interesting is the carbocupration of N-alkynyl carbamates 7, bearing Evans’s oxazolidinone chiral auxiliary, which leads to the formation of a single regioisomer of vinylcopper 8 that may be used for the preparation of functionalized adducts in acyclic systems [28-30]. Solvent plays a detrimental role in the regioselectivity of the reaction, and only Et2O leads to the α-isomer, due to a precomplexation of the organocopper with the carbamate moiety.

This research was supported by the Israel Science Foundation administrated by the Israel Academy of Sciences and Humanities (140/12) and by the Fund for promotion of Research at the Technion. IM is holder of the Sir Michael and Lady Sobell Academic Chair.

Intramolecular carbolithiation of N-allyl-ynamides: an efficient entry to 1,4-dihydropyridines and pyridines – application to a formal synthesis of sarizotan

© 2013 Minko et al; licensee Beilstein-Institut.
This is an Open Access article under the terms of the Creative Commons Attribution License (http://creativecommons.org/licenses/by/2.0), which permits unrestricted use, distribution, and reproduction in any medium, provided the original work is properly cited.
The license is subject to the Beilstein Journal of Organic Chemistry terms and conditions: (http://www.beilstein-journals.org/bjoc) 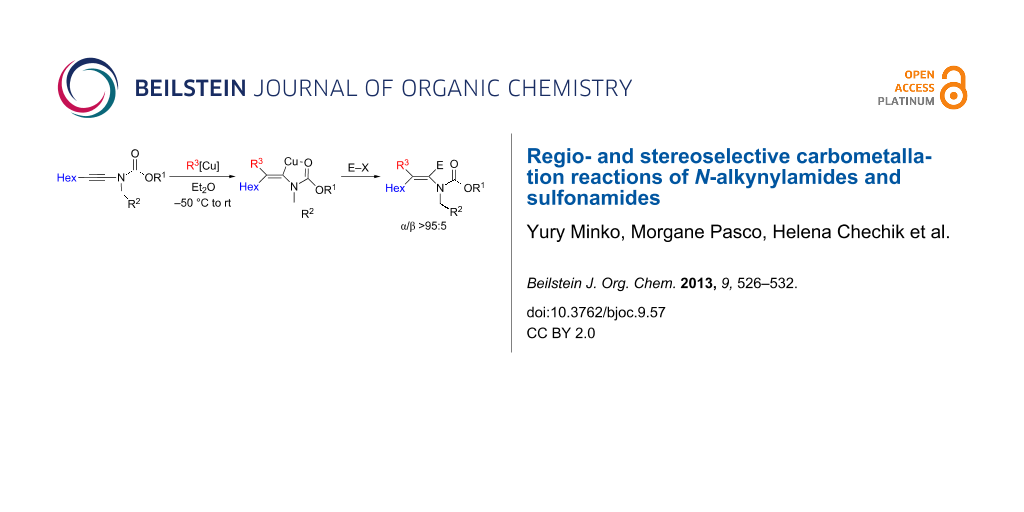