All articles from this author
Alberto Minassi


All articles from this author
Jonathan Clayden

Enamines and N-acyl enamines are in general nucleophiles, reacting with electrophiles at the carbon atom β to the nitrogen atom [1,2]. The resulting intermediate iminium or N-acyliminium ions are electrophilic, and may themselves trap a nucleophile at the position α to the nitrogen substituent. However, we [3,4] and others [5-7] have shown that this typical reactive polarity may be reversed when N-acylenamines (especially N-vinyl ureas [8]) meet organolithium nucleophiles. N-Carbamoyl enamines bearing α-aryl substituents (in other words, α-acylaminostyrenes), may undergo reaction as electrophiles, with the carbon atom β to nitrogen succumbing to attack by organolithium nucleophiles in an enamine carbolithiation reaction [9]. Similar reactivity is observed with related O-carbamoyl enols [10-12]. The organolithium resulting from the enamine carbolithiation is nucleophilic at the atom α to nitrogen, and such carbolithiations have been used to generate hindered organolithiums as intermediates for further rearrangement reactions [13], for example intramolecular acylation [6], arylation [3,4] or vinylation [4]. In this paper, we now report our studies on the scope of the carbolithiation–protonation of styrenes carrying α-acylamino substituents, namely N-alkenyl ureas and N-alkenyl carbamates.

Simple N-alkenyl ureas 1 were prepared by a reported method [2] entailing N-acylation of an acetophenimine with an isocyanate, followed by N-alkylation of the resulting urea. When urea 1a was treated with t-BuLi or s-BuLi in THF at −78 °C for one hour, followed by protonation, carbolithiated products 2a and 2b were isolated in good yield (Scheme 1 and Table 1, entries 1 and 2). Similar reactivity was observed between urea 1a and less hindered organolithiums such as iPrLi or n-BuLi [3], but in THF even at −78 °C a rearrangement [14-18] of the intermediate benzyllithium reduces the yield of the simple carbolithiation product. However, by lowering the temperature to −85 °C rearrangement occured to only a limited extent, and the addition product 2c was obtained in 53% yield (Table 1, entry 3). Rearrangement was also suppressed if the substituent Ar2 was replaced by either a p-chlorophenyl or a p-methoxyphenyl ring, and even with n-BuLi the carbolithiation–protonation product may be obtained in moderate yield from 1b and 1c (Table 1, entries 4 and 5).

β-Substituted vinyl ureas 3 are available as either E or Z geometrical isomers according to the method of synthesis: N-acylation of a propiophenimine typically generates an E-alkenylurea, but deprotonation and reprotonation of the urea inverts its geometry to Z [2], probably via an intramolecularly chelated urea-substituted allyl anion [17]. Urea E-3a was treated with n-BuLi in Et2O (the less-coordinating solvent suppresses rearrangement of the product [4]) at −40 °C: it underwent clean carbolithiation of the double bond, and on protonation urea 4a was obtained as a single diastereomer in 85% yield (Scheme 2 and Table 2, entry 1). Other E-alkenyl ureas bearing a range of substituted aromatic rings E-3b–f were likewise treated with alkyllithium reagents s-BuLi, iPrLi and t-BuLi, this time in toluene. As before, a noncoordinating solvent was used to suppress rearrangement. In each case the addition product 4b–f was obtained in good yield always as a single diastereomer (Table 2, entries 2–5 and 7). Styrenes with substituents on the aromatic ring underwent carbolithiation irrespective of the electronic character of the ring: with electron-rich or electron-poor aromatic rings Ar1 carbolithiation was complete in one hour.

a2:1 mixture of diastereoisomers; breaction reported in ref [3] but yield now improved.

When the reaction was performed using the Z-isomer of the starting materials, Z-3e and Z-3f (Scheme 2 and Table 2, entries 6 and 8), the other diastereomer of the product urea epi-4 was obtained selectively: the carbolithiation–protonation is completely diastereospecific. Both geometrical isomers of 3 presented similar reactivity and the products 4 were obtained in similar yields under the same reaction conditions.

To avoid possible contamination of the carbolithiation products by compounds arising from tandem carbolithiation–rearrangement, we were also keen to explore the possibility of carbolithiating vinyl ureas incapable of rearrangement, either because they lack the N’-aryl substituent or because the remote nitrogen is protected from attack by existing as an anion. Urea 5a, which was available as an intermediate from the synthesis of 3a, was treated with n-BuLi, using an additional equivalent of the organolithium to allow for deprotonation of the urea NH (Scheme 3) and in THF since a competing rearrangement is not a problem. Despite the carbolithiation now requiring an anion to act as an electrophile, the corresponding carbolithiated and protonated product 6a was obtained as a single diastereoisomer in excellent yield without chromatography (Table 3, entry 1) after one hour in THF at −40 °C. With urea 5b primary (n-BuLi), secondary (iPrLi) and also tertiary (t-BuLi) alkyllithium reagents were added successfully in excellent yields (Table 3, entries 2–4), and no chromatography was needed.

The relative configuration of the carbolithiation products 6 was established by X-ray crystallography of urea 6c (Figure 1). The stereochemical outcome of the reaction is consistent with syn-addition of the organolithium across the double bond (as is typical for carbolithiation [9,19]) followed by retentive protonation.

The relative configuration of the carbolithiation products 4 was likewise confirmed by methylation (NaH, MeI) of 6d to provide a single diastereoisomer of urea 4g in 60% yield, which was spectroscopically identical with the compound obtained by treating urea E-3g with iPrLi (Table 2, entry 9). Again, the stereochemical outcome is consistent with syn-carbolithiation followed by retentive protonation.

In principle, the urea products 2, 4 and 6 could be solvolysed to liberate free amines, as has been demonstrated for related compounds [4,15,20]. However, we reasoned that the related tert-butyloxycarbonyl-substituted carbamates would give more readily manipulated carbamate products bearing a standard Boc protecting group, providing they too could be carbolithiated and trapped without rearrangement. Related carbamates are reactive towards carbolithiation–rearrangement reactions [6]. Thus, Boc-protected carbamates 9–11 were synthesised by acylation of the imines 7 and 8 with di-tert-butyl dicarbonate or with (−)-menthylchloroformate (Scheme 4). The N-alkenylcarbamates 10 and 11 were formed exclusively as their E isomers, and the X-ray crystal structure of E-10 is shown in Figure 2.

Vinyl carbamate 9 was treated with primary, secondary or tertiary alkyllithium reagents at −78 °C in THF for one hour (Scheme 5), and after protonation the addition products 12a–c were isolated in good yields (Table 4, entries 1–3) . Substituted carbamate 10 also reacted with primary, secondary or tertiary alkyllithium reagents under similar conditions, and in this case the carbamates were deprotected by treatment with CF3CO2H in a one-pot process, to provide the amines 13a–c in good yields over the two steps (Table 4, entries 4–6). In every case, the amine 13 was obtained as a single diastereomer, which we assume, by analogy with the reactions of the equivalent ureas, to be that shown, arising from syn-carbolithiation and retentive protonation.

E-10 was isomerised to Z-10 by treatment with LDA and reprotonation (presumably, like the equivalent ureas [2,3], via an intramolecularly coordinated Z-allyllithium [21,22]), giving Z-10 in excellent yield (Scheme 4). However, in contrast to Z-alkenyl ureas, Z-10 was rather less reactive than its E-isomer. The carbolithiation with iPrLi (Scheme 5) was slower, and had to be performed for 24 hours instead of 1 hour. After deprotection with trifluoroacetic acid, the amine epi-13b was obtained in lower yield (50%) and as a 8:2 mixture of diastereomers (Table 4, entry 7). The loss of diastereospecificity may be explained by the long reaction time: we assume that syn-carbolithiation is followed by a partial epimerisation of the intermediate organolithium during the 24 h before the reaction is quenched.

Related vinylureas will undergo enantioselective carbolithiation in the presence of (−)-sparteine or a (+)-sparteine surrogate [4], but enantioselective carbolithiation of carbamate 9 in the presence of (−)-sparteine led to product with only 60:40 er. The use of a chiral auxiliary in the form of a (−)-menthylcarbamate (11) also failed to induce selectivity, reacting with iPrLi to yield a carbolithiated product 14 in 60% yield as a 50:50 mixture of diastereoisomers (Table 4, entry 8).

In conclusion, we have demonstrated that electron-rich double bonds of vinyl ureas and carbamates may undergo carbolithiation with primary, secondary and tertiary organolithium reagents. N-tert-butoxycarbonyl vinylcarbamates may be carbolithiated, protonated and deprotected in a one-pot synthesis of amines employing this unusual umpolung nucleophilic β-alkylation. With β-substituted vinylureas, the carbolithiation is diastereospecific, with (E) and (Z)-isomers of the ureas giving different diastereoisomers of the products; (E)-N-alkenylcarbamates react with complete diastereospecificity. The overall syn-relative configuration of the reaction products, which probably arises from syn-carbolithiation followed by retentive protonation, was confirmed by X-ray crystallography.

We are grateful to the EPSRC for funding this work, to Alistair Holdsworth for carrying out some preliminary reactions, and to Madeleine Helliwell for determining the X-ray crystal structures of 6c and E-10.

A proposed sustainability index for synthesis plans based on input provenance and output fate: application to academic and industrial synthesis plans for vanillin as a case study

© 2013 Lefranc et al; licensee Beilstein-Institut.
This is an Open Access article under the terms of the Creative Commons Attribution License (http://creativecommons.org/licenses/by/2.0), which permits unrestricted use, distribution, and reproduction in any medium, provided the original work is properly cited.
The license is subject to the Beilstein Journal of Organic Chemistry terms and conditions: (http://www.beilstein-journals.org/bjoc) 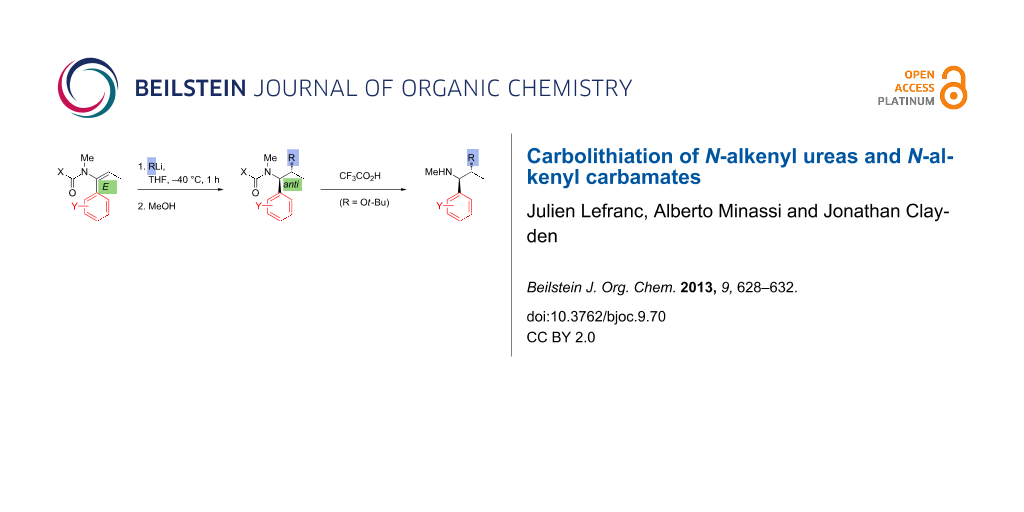