All articles from this author
Haoning Gong


All articles from this author
Xuehai Yan

This article is part of the thematic issue "Nanoarchitectonics for advanced applications in energy, environment and biology".

Oxidative stress can lead to permanent and irreversible damage to cellular components and even cause cancer and other diseases. Therefore, the development of antioxidative reagents is an important strategy to alleviate chronic diseases and maintain the redox balance in cells. Small-molecule bioactive compounds have exhibited huge therapeutic potential as antioxidants and anti-inﬂammatory agents. Myricetin (Myr), a well-known natural flavonoid, has drawn wide attention because of its high antioxidant, anti-inflammatory, antimicrobial, and anticancer efficacy. Especially regarding antioxidation, Myr is capable of not only chelating intracellular transition metal ions for removing reactive oxygen species, but also of activating antioxidant enzymes and related signal pathways and, thus, of sustainably scavenging radicals. However, Myr is poorly soluble in water, which limits its bioavailability for biomedical applications, and even its clinical therapeutic potential. The antioxidant peptide glutathione (GSH) plays a role as antioxidant in cells and possesses good hydrophilicity and biocompatibility. However, it is easily metabolized by enzymes. To take advantages of their antioxidation activity and to overcome the abovementioned limitations, GSH, Zn2+, and Myr were selected to co-assemble into Myr-Zn2+-GSH nanoparticles or nanoarchitectonics. This study oﬀers a new design to harness stable, sustainable antioxidant nanoparticles with high loading capacity, high bioavailability, and good biocompatibility as antioxidants.

Myricetin (Myr), a well-known natural flavonoid, has drawn wide attention because of its high antioxidant, anti-inflammatory, antimicrobial, and anticancer efficacy [16]. Myr is capable of not only chelating intracellular transition metal ions for removing reactive oxygen species (ROS) [20], but also of activating antioxidant enzymes and the AMPK/NRF2 signal pathway [21], yielding sustainable scavenging of radicals. Myr can inherently increase body resistance to carcinogens, viruses, and allergens [17]. In spite of the tremendous potential, Myr possesses the same shortcomings as many hydrophobic small molecules, namely low bioavailability, poor water solubility and rapid degradation at pH > 6.8, which limits its clinical therapeutic potential [22]. GSH consists of glycine, cysteine, and glutamic acid. The cysteine residue plays a pivotal role in protecting the body from oxidation damage; however, GSH is easily metabolized by enzymes [23]. In this work, we employed a facile co-assembly strategy to design hybrid nanoparticles as antioxidants [24-31]. Myr, Zn2+, and GSH were co-assembled to Myr-Zn2+-GSH (MZG) nanoparticles. The obtained MZG nanoparticles exhibit high loading capacity as well as good bioavailability and biocompatibility, leading to stable antioxidant effects.

The precipitates of MZG were collected after centrifuging and washing with water and, subsequently, dissolved in 0.1 M NaOH solution. The concentrations of Myr and GSH were determined by UV–vis spectroscopy. The concentration of Zn2+ was measured by inductively coupled plasma optical emission spectroscopy (ICP-OES).

First, a solution of 2,2′-azino-bis(3-ethylbenzothiazoline-6-sulfonic acid) radical cations (ABTS+) solution was prepared. 7 mM of ABTS solution was mixed with 2.45 mM of potassium persulfate solution and kept for 12 h in the dark. The UV–vis absorption intensity of a 0.7 mM ABTS solution (diluted in PBS) was 0.7 ± 0.02. A certain volume of diluted ABTS+ solution was added to different concentrations of Myr, GSH, and MZG. A UV–vis spectrophotometer was used to record the absorption intensity of ABTS+ at 734 nm. The radical scavenging rate was calculated according to the following equation:

The cytotoxicity of the as-prepared MZG nanoparticles was assessed against 3T3 cells. 3T3 cells were cultivated with Dulbecco's Modified Eagle Medium (DMEM) containing 10% (v/v) fetal bovine serum (FBS) and 1% (v/v) penicillin/streptomycin. 3T3 cells at a density of 1 × 105 cells per well were incubated with different concentrations of MZG (equivalent concentration of Myr: 0, 10, 20, 40, 80, and 100 µM) for 24 h. The cell viability was tested with the methyl thiazolyl tetrazolium (MTT) assay.

Evaluation of ROS scavenging in cells

First, the median lethal dose (LD50) value of H2O2 was evaluated. 3T3 cells at a density of 2 × 105 cells per well were incubated with H2O2 at different concentrations (0, 10, 20, 40, 60, 80, 100, 150, and 200 µM). Second, the ROS scavenging activity of MZG was evaluated. After the treatment of 3T3 cells with different concentrations of MZG for 24 h, 100 µM of H2O2 was used to treat the 3T3 cells. The capability of protecting cells from damage was accessed by the cell viability assay. After that, 2′7′-dichlorodihydrofluorescein diacetate (DCFH-DA) dye was used to incubate these cells for 5 min and the fluorescence intensity of the cells was recorded via confocal laser scanning microscopy.

Synthesis and characterization of MZG

We chose Zn2+, a typical essential metal, to effectively bond Myr and GSH via coordination interaction (Myr/GSH = 1:2) [32-34]. The nanoparticles were formed by coordination self-assembly of Zn2+, Myr, and GSH (Figure 1a). They were expected to show good antioxidant activity to protect cells from the ROS-induced damage (Figure 1b). The transmission electron microscopy (TEM) image in Figure 2a shows spherical MZG nanoparticles. Size and zeta potential value of the MZG nanoparticles were 44.6 ± 26.5 nm and −23.1 ± 3.4 mV, respectively, measured by dynamic light scattering (DLS) (Figure 2b) and consistent with the TEM results. Importantly, the co-assembly mechanism was further revealed through quantitative stoichiometry analysis. The quantitative component analysis by UV–vis and ICP-OES proved that the molar ratio of Myr/GSH/Zn2+ was close to 1:1:1 (Supporting Information File 1, Table S1 and Figure S1).

The UV–vis absorption spectra of pure Myr dispersed in 0.1 M NaOH (pH 13), Myr/Zn2+ complex (pH 5.5), and MZG nanoparticles (pH 5.5) were measured. The UV–vis absorption spectrum of MZG nanoparticles exhibited a blue shift at 550 nm, compared with Myr/Zn2+, which was assigned to the charge transfer between GSH and Zn2+ (Figure 2c). These results demonstrated that Zn2+ as the coordination component co-assembles with Myr and GSH. Fourier-transform infrared (FTIR) spectra were used to further confirm the self-assembly of the MZG nanoparticles. In Figure 2d, the two bands at 2522 cm−1 and 3350 cm−1 were assigned to the mercapto group (–SH) and the stretching vibration of the amino group (–NH2) of GSH. The band at 1619 cm−1 was assigned to the C=C group of Myr. In addition, the band at 3417 cm−1 was assigned to the phenolic hydroxy group. The two bands of phenolic hydroxy and amino groups shifted to lower wavenumbers, compared with the corresponding bands of Myr and GSH, suggesting that these groups coordinated to Zn2+.

Myr possesses excellent antioxidant activity to scavenge ROS, which has impact on chelate metal ions such as Fe2+ and Cu2+, inhibits glutathione reductase activity, and regulates PI3K/Akt and MAPK signal pathways to avoid oxidative stress-induced apoptosis [20,35-37]. Also, GSH acts as an important antioxidant in the body owing to the –SH group, which can be reduced. GSH is a non-enzymatic antioxidant molecule, which is necessary for cell redox homeostasis and survival [38].

We have prepared antioxidant MZG nanoparticles by co-assembly of the naturally occurring flavonoid Myr and GSH in the presence of Zn2+. The resulting MZG nanoparticles overcame the disadvantages of water-insoluble Myr and GSH that is quickly metabolized, improving their bioavailability. Importantly, the as-prepared MZG nanoparticles exhibited robust stability and sustainable ROS scavenging activity, protecting cells from ROS damage. The MZG nanoparticles provide an alternative opportunity for optimizing the antioxidation capability of conventional drugs and present great potential for further biomedical applications.

This work was financially supported by the Innovation Research Community Science Fund of China (No. 21821005), National Natural Science Foundation of China (Project Nos. 22072154 and 21977095), the Key Research Program of Frontier Sciences of Chinese Academy of Sciences (CAS, Grant No. QYZDB-SSWJSC034), and the National Natural Science Foundation of Hebei Province (No. B2020103025).

© 2022 Ma et al.; licensee Beilstein-Institut.
This is an open access article licensed under the terms of the Beilstein-Institut Open Access License Agreement (https://www.beilstein-journals.org/bjnano/terms), which is identical to the Creative Commons Attribution 4.0 International License (https://creativecommons.org/licenses/by/4.0). The reuse of material under this license requires that the author(s), source and license are credited. Third-party material in this article could be subject to other licenses (typically indicated in the credit line), and in this case, users are required to obtain permission from the license holder to reuse the material. 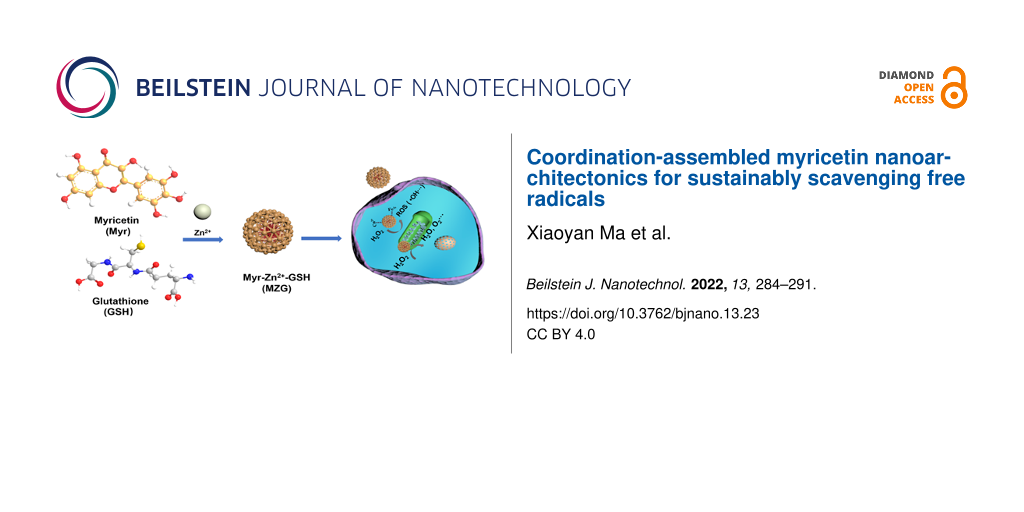