All articles from this author
Nitirat Chimnoi

A series of 3-amino-6,7-dimethoxycoumarins conjugated with the N-benzylpyridinium moiety through an amide-bond linkage was synthesized and evaluated for their acetylcholinesterase inhibitory activity. A number of the benzylpyridinium derivatives exhibited potent activities with inhibitory concentration (IC50) values in the nanomolar concentration range. Among them, the 2,3-difluorobenzylpyridinium-containing compound was the most potent inhibitor with an IC50 value of 1.53 ± 0.01 nM. Docking studies revealed that the synthesized compounds inhibit the target enzyme by a dual binding site mechanism whereby the coumarin portion binds with the peripheral anionic site while the N-benzylpyridinium residue binds with the catalytic anionic site of the enzyme.

An increasing number of countries are facing a rapid growth of the elderly population. The birth rates of many countries, such as China, Japan, and Thailand are lower than the number theoretically required for the replacement of successive generations, resulting in an aging population [1]. According to a United Nation report, the number of people over the age of 60 is expected to more than double by 2050, increasing from 962 million globally in 2017 to 2.1 billion in 2050, and exceed the number of younger people. As people age, they become susceptible to ageing-related health issues, such as arthritis, heart disease, cancer, diabetes and Alzheimer’s disease, all of which can potentially decrease the quality of life. Dementia, commonly found among the elderly, can be caused by the Alzheimer’s disease (AD) – a progressive neurodegenerative disorder. The Alzheimer’s Association reported that one in nine people over the age of 65 suffers from AD [2]. According to this report, approximately 46.8 million people worldwide lived with dementia in 2015, and this number is predicted to reach 75 million in 2030 and 131.5 million in 2050. AD is a chronic condition that remains incurable; most of the existing treatments only delay the onset or further advancement of AD.

Among the current hypotheses for the treatment of AD, inhibition of acetylcholinesterase enzyme (AChE), which is responsible for the degradation of the neurotransmitter acetylcholine (ACh), is the most widely accepted hypothesis. AChE inhibition can increase ACh levels in the synaptic clefts and then alleviate the cognitive deficit in AD patients. The design of novel acetylcholinesterase inhibitors (AChEIs) has been mostly based on a dual-binding site strategy whereby the designed molecules simultaneously bind to amino acid residues present in both the catalytic anionic site (CAS) and the peripheral anionic site (PAS) of AChE. The CAS is located deeply inside the narrow gorge and is responsible for ACh hydrolysis. On the other hand the PAS is located around the entrance of the active site gorge and is responsible for transient substrate binding before reaching the active site. Especially PAS plays a crucial role in β-amyloid (Aβ) fibrillogenesis in AD patients by forming stable AChE–Aβ complexes [3,4]. Thus, these types of effects may render them potential therapeutic agents for AD treatment. Hybrid compounds such as huperzine A–tacrine hybrids [5], donepezil–tacrine hybrid related derivatives [6,7] and tacrine–indole hybrids [8] with dual-binding site properties exhibit potent AChE inhibition activities. In addition, coumarin compounds linked with various side chain moieties [9-11] as well as with benzylpyridinium moieties [12-14] have been reported as dual-binding site AChE inhibitors. Recently we have reported the AChE inhibitory activity of the coumarin derivative, scopoletin conjugated with a pyridinium side chain (Figure 1) [15] and a docking study revealed that the scopoletin portion of the compound binds to amino acid residues in PAS, whereas the N-benzylpyridinium moiety binds to those present in the CAS of AChE. To develop potent AChE inhibitors, we were interested in aminocoumarin as a replacement of scopoletin due to the presence of the amino group in the former that may be useful for binding with this enzyme. Herein, we report our progress on the synthesis, biological evaluation, and molecular docking of 3-aminocoumarin linked with the benzylpyridinium moiety through an amide bond.

The target 3-aminocoumarin-N-benzylpyridinium compounds 4a, 5a, 9a–9i, and 10a were synthesized as shown in Scheme 1. 3-Acetamidocoumarin (2) was prepared following Dakin’s procedure [16] by reacting salicylaldehyde (1) with N-acetylglycine in acetic anhydride at 110 °C for 7 h. Hydrolysis of 2 with 50% HCl in ethanol at 100 °C for 1 h provided 3-aminocoumarin (3). Treatment of 3 with either isonicotinyl chloride (n = 0) or 4-pyridylacetyl chloride (n = 1), generated by reacting the corresponding carboxylic acid with oxalyl chloride, in the presence of triethylamine provided the N-acyl-3-aminocoumarins 4 or 5, respectively. The analogs 9 and 10, which contain dimethoxy substituents on the coumarin ring, were prepared in the same manner, starting from 2-hydroxy-4,5-dimethoxybenzaldehyde (6). Finally, the benzylpyridinium bromide salts 4a, 5a, 9a–9i, and 10a were obtained by treatment of 4, 5, 9, and 10 with substituted benzyl bromides in dichloromethane at room temperature for 72 h.

The AChE inhibitory activity of the synthesized compounds was evaluated by Ellman’s method [17] using Electrophorus electricus AChE; donepezil hydrochloride and tacrine were used as the reference compounds. The tested compounds with more than 50% enzyme inhibition at a concentration of 1 μM were further evaluated for their half maximal inhibitory concentration (IC50) values, and the results are shown in Table 1.

aConcentration of the compound that produced 50% inhibition of enzyme activity.
bResults are expressed as mean ± standard error with the average of triplicate independent experiments.
c% Inhibition at concentration of 1 μM.

On the basis of the potent activity of 9a (IC50 of 12.48 ± 0.71 nM), further modifications by introducing chlorine or fluorine substituents at the ortho-, meta-, or para-positions on the benzyl group were investigated. The results showed that the type and the position of the substituents on the benzyl group influenced the inhibitory activity against AChE. For chlorine as a substituent, the activity followed the order of ortho > meta > para. Compared with benzylpyridinium salt 9a, a chlorine substitution at the o-position (9b) provided a two-fold improvement in activity, whereas m- and p-substitutions (9c and 9d, respectively) led to comparable and diminished inhibitory activities, respectively. For fluorine as a substituent, the activity also followed the order of ortho > meta ≈ para. The AChE inhibitory activities of all fluorine analogs were superior to those of the chlorine analogs and the unsubstituted benzylpyridinium salt 9a. In detail, a fluorine substituent at the ortho-position (9e) increased the inhibitory activity with an IC50 value of 3.05 ± 0.28 nM, whereas the m- and p-fluoro-substituted analogs 9f and 9g provided comparable IC50 values of 5.04 ± 0.26 and 5.31 ± 0.38 nM, respectively. Difluorinated benzylpyridinium salts were also examined for their inhibitory activities and were found to be more active than the corresponding monofluorinated compounds. Thus compound 9h, a 2,3-difluorobenzylpyridinium salt, exhibited the highest activity in this study with an IC50 value of 1.53 ± 0.01 nM and compound 9i having a 2,6-difluorobenzyl substituent showed a slightly inferior activity with an IC50 value of 2.43 ± 0.18 nM. The IC50 value of 9h, the most active compound in this study, was 35-fold lower than that of donepezil hydrochloride (IC50 of 53.51 ± 3.12 nM) and 124-fold lower than that of tacrine (IC50 of 190.37 ± 4.55 nM). Moreover, 9h was inactive against MRC-5 normal embryonic lung cell (0% cytotoxicity at concentration of 50 μg/mL).

Molecular docking studies [15] were performed to study the binding mode and interactions of the synthesized compounds with AChE. A crystal structure of recombinant human acetylcholinesterase complexed with donepezil (PDB code 4ey7) [18] retrieved from the Protein Data Bank was used in the study because of its high similarity (approximately 88% similarity), good resolution (at 2.35 Å) and ligand state with donepezil of Human AChE structure. Molecular docking of AChE via the GOLD v5.2.2 program [19] was used to investigate the orientation of the compounds in the rhAChE binding site. Compounds 4a, 9a, 9b, 9e, 9h, 9i, and 10a were selected as representatives for the docking study.

The active site of human AChE, which is at the bottom of a deep and narrow gorge, consists of several major domains. A catalytic triad (CT) that comprises Ser203, His447, and Glu334 residues is responsible for hydrolyzing the ester bond of ACh [20]. The CAS, which is responsible for the binding of the quaternary ammonium moiety of choline, consists of Trp86, Tyr133, Tyr337, and Phe338 [21]. The acyl pocket, which binds to the acetyl group of ACh, consists of Phe295 and Phe297 residues [21]. The oxyanion hole that interacts with the ACh carbonyl oxygen consists of Gly121, Gly122, and Ala204 [22,23]. In addition to the active site another binding site, known as PAS, is located around the entrance of the active site gorge. The PAS consists of Tyr72, Asp74, Tyr124, Trp286, and Tyr341 [23,24].

From the docking result, the docked orientation of donepezil showed a root-mean-square deviation (RMSD) of 0.474 Å when compared with the conformation in the crystal structure, thereby indicating its potential as a suitable method for the binding mode of compounds in the rhAChE binding site. The docked conformations of donepezil and the synthesized compounds are shown in Figure 2. All docked compounds were located similar to donepezil in the binding pocket. The benzylpyridinium moiety was bound close to the CT and the CAS while the chromene rings were located at the PAS. Compounds 9a, 9b, 9e, 9h, and 9i revealed similar orientations in the binding pocket whereas the binding of compounds 4a and 10a was partially different. The orientation of the chromene ring of compound 4a was shifted away from the others, whereas the chromene ring of compound 10a was flipped to the opposite site when compared with the other compounds.

The docking study showed that the docked orientations of the selected compounds in the binding pocket were similar to that of donepezil. The results indicated binding interactions between the chromene ring and the PAS amino acids residues as well as between the benzylpyridinium moiety and the CAS amino acid residues. Interactions between the carbonyl groups of the chromene ring and of the amide group to Phe338 in the CAS and between the nitrogen atom of the amide group to Tyr124 in the PAS were the key interactions of the synthesized 3-aminocoumarin-N-benzylpyridinium conjugates in the binding pocket of AChE.

A series of 3-amino-6,7-dimethoxycoumarins conjugated with the N-benzylpyridinium moiety through an amide linkage was synthesized and investigated for their AChE inhibitory activities. A number of benzylpyridinium derivatives exhibited potent activity with IC50 values in the nanomolar concentration range. The results showed that the dimethoxy substituent on the chromene ring, the length of the amide linker, as well as the type and position of substituents on the benzyl group all contributed significantly to the AChE inhibitory activity. The 6,7-dimethoxy-substituted chromene ring significantly enhances the activity. An additional methylene unit of the linker between the amide carbonyl group and the pyridine ring led to a diminished activity. The fluorine substituent at the ortho-position on the benzyl ring provided a remarkable increase in AChE inhibition. Among the derivatives, the 2,3-difluorobenzylpyridinium compound was the most potent with an IC50 value of 1.53 ± 0.01 nM, followed by the 2,6-difluorobenzylpyridinium and 2-fluorobenzylpyridinium analogs with IC50 values of 2.43 ± 0.18 and 3.05 ± 0.28 nM, respectively. Docking studies revealed that the synthesized compounds can act as dual binding site inhibitors by allowing the coumarin portion to bind with the PAS and the N-benzylpyridinium residue to bind with the CAS of AChE.

We gratefully acknowledge Dr. Poonsakdi Ploypradith at the Chulabhorn Research Institute for a critical reading of the manuscript. We also thank Miss Kittiporn Trisupphakant for recording EIMS and IR spectral data.

© 2018 Khunnawutmanotham et al.; licensee Beilstein-Institut.
This is an Open Access article under the terms of the Creative Commons Attribution License (http://creativecommons.org/licenses/by/4.0). Please note that the reuse, redistribution and reproduction in particular requires that the authors and source are credited.
The license is subject to the Beilstein Journal of Organic Chemistry terms and conditions: (https://www.beilstein-journals.org/bjoc) 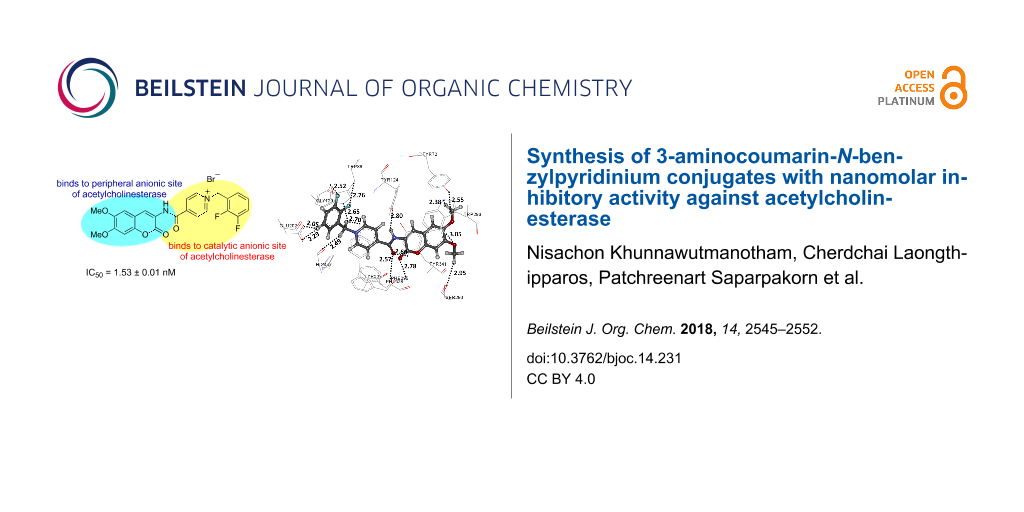