All articles from this author
Katharina Boden


All articles from this author
Guido J. Reiss


All articles from this author
Walter Frank

This article is part of the thematic issue "Multicomponent reactions III" and is dedicated to Prof. Dr. Dr. h.c. mult. Peter Langer on the occasion of his 50th birthday.

Pyrazoles [1,2] and pyrazolines [3-5] are privileged 1,2-diazole derivatives in a broad range of application, both in life and materials sciences. While the former are fully conjugated and can be considered as heteroaromatic 6π-systems with interesting properties as crop-protecting agents [6,7], as pharmaceutically active ingredients [8-11], as ligands [12,13], and as chromophores [14-16], the partially unsaturated 2H-pyrazolines have particularly attracted attention for instance as antibacterial [17], anti-inflammatory [18], antidiabetic [19], and antidepressive [20] agents. Especially, 1-acylpyrazolines have shown nanomolar in vitro activities against chloroquine-sensitive and resistant strains of Plasmodium falciparum and can therefore be considered for the treatment of malaria [21]. Furthermore, similar derivatives have shown micromolar and submicromolar activity against 60 selected cancer cell lines, presumably by inhibition of microtubuli formation in cancer cells [22]. More specifically, a series of 60 1,3-diaryl-1-acylpyrazolines was tested as xanthine oxygenase inhibitors that can be efficacious against articular gout, cancer, and inflammation, with IC50 values of four derivatives in the range of 5.3–15.2 μM (Figure 1) [23].

1-Acyl-5-hydroxypyrazolines have been shown to be analgesics with a slightly improved pain-relieving efficacy than Aspirin® [24,25], and 5-nitro-2-furyl-substituted derivatives are active antibacterials against the strains S. aureus, A. aerogenes, E. coli and B. subtilis (Figure 2) [26,27].

Although numerous syntheses of pyrazolines [3-5] in general and 1-acyl-5-hydroxypyrazolines [24-26] specifically have been published employing a cyclizing addition of an acylhydrazone to the carbonyl group as a ring-forming reaction [32-40], their diversity-oriented one-pot synthesis in a multicomponent approach has remained unexplored to date. In the course of our program directed to develop multicomponent syntheses of heterocycles by transition-metal catalysis [41,42] we conceptualized catalytic entries to alkynones and alkynediones as suitable intermediates in addition–cyclocondensation syntheses of numerous heterocycles, which can indeed be prepared by consecutive multicomponent reactions [43-47]. Particularly interesting are alkynediones, because, as densely functionalized trielectrophiles, the alkyne, ynone and dicarbonyl functionalities can be selectively addressed. We have established two complementary one-pot pathways to alkynediones, a glyoxylation–alkynylation (GA) [48] and an activation–alkynylation (AA) [49] sequence, which both take advantage of a copper-catalyzed alkynylation of the intermediary formed (hetero)arylglyoxyl chloride (Scheme 1). The alkynediones can be subsequently transformed, still in the same reaction vessel, to quinoxalines [48,50-52], pyrimidines [48,49], and 5-acylpyrazoles [48,49]. The latter 5-acylpyrazole arose after work-up from the three-component AA–cyclocondensation synthesis employing Boc-hydrazine as a binucleophilic hydrazide substrate. Based on our attempts to isolate potential 1,5-diacylpyrazole precursors we discovered that 1,5-diacyl-5-hydroxypyrazolines are the intermediary products. Here, we report on the novel three-component AA–condensation–cyclization synthesis of 1,5-diacyl-5-hydroxypyrazolines.

In our initial study [49], the three-component AA–cyclocondensation synthesis, starting from phenylglyoxylic acid (1a), phenylacetylene (2a), and Boc-hydrazide (4a) through the formation of 1,4-diphenylbut-3-yne-1,2-dione (3a), with subsequent N-deacylation as the consequence of basic work-up (Scheme 2), furnished 5-benzoyl-3-phenyl-1H-pyrazole (6a) in 41% isolated yield.

In addition to spectroscopic assignment the structure of 6a has now been corroborated by an X-ray structure analysis showing infinite chains of molecules 6a formed by intermolecular hydrogen bonding between the pyrazole N1 and the carbonyl O1 (Figure 3) [53].

The first assumption was that the tentative intermediate 5a could be a 1,5-diacylpyrazole. However, upon performing the terminal cyclization step starting from 1,4-diphenylbut-3-yne-1,2-dione (3a) and Boc-hydrazine (4a) under identical conditions 1-Boc-5-benzoyl-5-hydroxypyrazoline was isolated in 83% yield (Scheme 3).

The molecular structure was additionally corroborated by X-ray structure analysis showing that the assignment of intermediate 5a was not a fully unsaturated pyrazole (Figure 4) [53].

A quick optimization screening of the activation–alkynylation synthesis of 1,4-diphenylbut-3-yne-1,2-dione (3a) revealed that the use of KOH dried triethylamine instead of the initial preconditioning (Na/benzophenone dried) led to a reduction of the reaction time t1 from 24 to 15 h (see Supporting Information File 1, Table S1). In addition, the concentration could be doubled and the obtained yield of diphenylbut-3-yne-1,2-dione (3a) increased from 63 to 76%.

The terminal cyclization step, consisting of a Michael addition of benzoyl hydrazide (4b) to diphenylbut-3-yne-1,2-dione (3a) followed by a cyclizing addition of the central hydrazide nitrogen atom to the carbonyl group, was monitored by GC–MS and optimized with respect to temperature T, reaction time t2, and the alcohol additive (Table 1).

A ratio of 1.2 equiv of hydrazide 4b to 1.0 equiv of 3a turned to be optimal for achieving full conversion (Table 1, entries 7–16) and at a reaction temperature of 175 °C the reaction time of 5 min was identified to achieve full conversion with very good to excellent yields of isolated 1,5-diacyl-5-hydroxypyrazoline 5b (Table 1, entries 12–16). Although ethylene glycol as a cosolvent (Table 1, entry 13) gave slightly higher yields and ethanol furnished slightly lower yields (Table 1, entry 14), 2-methoxyethanol not only gave high yields of 5b, but also proved to be practical with respect to work-up. Upon comparison between dielectric and conductive heating the reaction in the microwave cavity gave no detectable difference in reaction time and yield. All these optimized conditions were therefore directly employed in the consecutive one-pot sequence. However, some adjustments in the final step were necessary because an increase of pressure was detected under dielectric heating. Therefore, the consecutive process was optimized with respect to the terminal step (Table 2).

Taking into account the combined yield of 71% for both individually performed steps (ynedione formation with 76% and cyclization with 94%) is slightly lower than that of the one-pot sequence with 78% (Table 2, entry 8), the consecutive three-component process clearly is superior. With four bond-forming steps (activation, alkynylation, Michael addition, and cyclization) the average yield per bond-forming step accounts to 94%.

With the optimized conditions of the consecutive three-component synthesis in hand (hetero)arylglyoxylic acids 1, oxalyl chloride, arylacetylenes 2, and hydrazides 4 were reacted in 1,4-dioxane and in the presence of catalytic amounts of copper(I) iodide in a one-pot activation–alkynylation–cyclization sequence to give 1,5-diacyl-5-hydroxypyrazoline 5 after flash chromatography on silica gel in moderate to good yields (Scheme 5, Table 3).

The structures of the 1,5-diacyl-5-hydroxypyrazolines 5 were unambiguously assigned by 1H and 13C NMR spectroscopy, in selected cases by NOESY, HSQC, and HMBC experiments, as well as by EI mass spectrometry and the elemental composition was confirmed by combustion analyses. Additionally, the structure was corroborated by an X-ray structure analysis of compound 5r showing dimers held together by inter- and intramolecular hydrogen bonding (Figure 5) [53].

All attempts to dehydrate 1,5-diacyl-5-hydroxypyrazoline 5b under alkaline or Brønsted acidic conditions were accompanied by simultaneous deacylation of substituent R3 finally furnishing 5-(hetero)aroyl-3-(hetero)aryl-1H-pyrazole 6a (for attempted dehydrative aromatization, see Supporting Information File 1, Table S5), as already reported for alkaline deprotection–aromatization [49]. However, compound 5b is stable against water and weakly basic conditions. This indicates that 1,5-diacyl-5-hydroxypyrazolines might act as acyl transferring agents under certain conditions.

In summary we could elucidate that the consecutive three-component activation–alkynylation–cyclization sequence of (hetero)arylglyoxylic acids, oxalyl chloride, arylacetylenes, and hydrazides does not form aromatic pyrazoles, but rather 1,5-diacyl-5-hydroxypyrazolines, i.e., the aromatizing elimination of water does not occur under these neutral conditions. This novel one-pot synthesis of 1,5-diacyl-5-hydroxypyrazolines is concise, highly efficient and diversity-oriented. The deacylating aromatization of the title compounds under weakly alkaline or acidic conditions indicates acyl-transfer ability. Furthermore, the peculiar reactivity of the ynedione intermediate calls for more sophisticated cyclizing processes, eventually in a one-pot fashion. Further studies exploring the dense electrophilic reactivity of ynediones in consecutive multicomponent reactions are still underway.

The support of this work by the Fonds der Chemischen Industrie is gratefully acknowledged.

© 2019 Görgen et al.; licensee Beilstein-Institut.
This is an Open Access article under the terms of the Creative Commons Attribution License (http://creativecommons.org/licenses/by/4.0). Please note that the reuse, redistribution and reproduction in particular requires that the authors and source are credited.
The license is subject to the Beilstein Journal of Organic Chemistry terms and conditions: (https://www.beilstein-journals.org/bjoc) 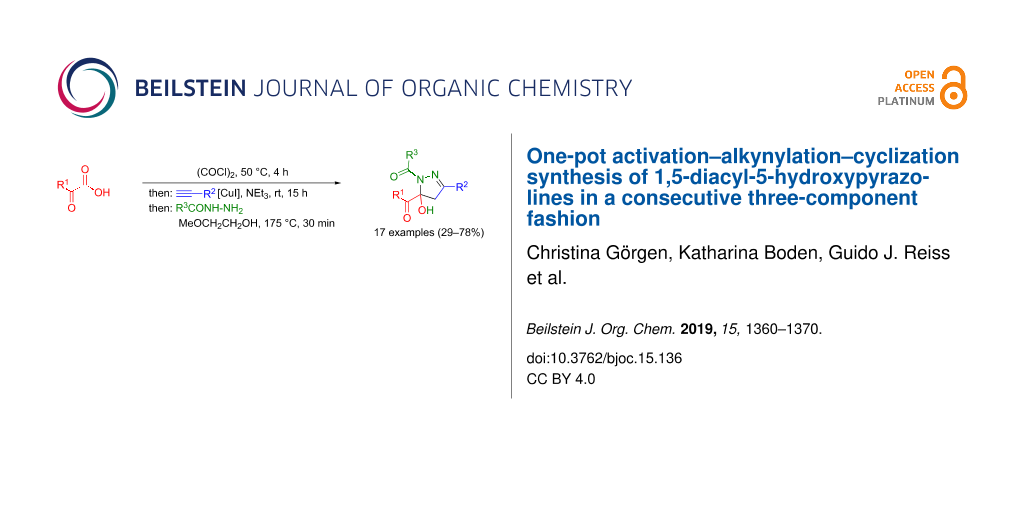