All articles from this author
Dmitry S. Ryabukhin

Reactions of 3-arylpropynenitriles (ArC≡CCN) with electron-rich arenes (Ar′H, benzene and its polymethylated derivatives) under the action of aluminum bromide (AlBr3, 6 equiv) at room temperature for 0.5–2 h result in the stereoselective formation of 3,3-diarylpropenenitriles (Ar(Ar′)C=CHCN) in yields of 20–64%, as products of mainly anti-hydroarylation of the acetylene bond. The obtained 3,3-diarylpropenenitriles in triflic acid CF3SO3H (TfOH) at room temperature for 1 h are cyclized into 3-arylindenones in yields of 55–70%.

Conjugated acetylene nitriles (propynenitriles, R–C≡C–C≡N) are versatile building blocks in organic synthesis for the preparation of a plethora of functionalized compounds and heterocycles. The presence of conjugated acetylene and nitrile bonds in these compounds leads to an enhancement of reactivity of both functional groups. Thus, propynenitriles take part in electrophilic [1,2] and nucleophilic [3-6] addition reactions onto the acetylene bond leading to various substituted nitriles. Reactions onto both acetylene and nitrile groups are widely used for the construction of various heterocyclic systems [7-15].

Recently, we have shown that reactions of 3-arylpropenenitriles (cinnamonitriles, ArCH=CHCN) with arenes (Ar′H) under the superelectrophilic activation by the Brønsted superacid CF3SO3H (TfOH, triflic acid) or the strong Lewis acid AlBr3 result in the formation of 3,3-diarylpropanenitriles (Ar(Ar′)CHCH2CN) through the regioselective hydroarylation of the carbon–carbon double bond. In TfOH, the reactions proceed further to 3-arylindanones, as products of the intramolecular aromatic acylation of the 3,3-diarylpropanenitriles by the electrophilically activated nitrile group [16,17]. Based on this study and our work on electrophilic transformations of alkynes [18-20], we investigated reactions of 3-arylpropynenitriles under electrophilic activation conditions (see [21] for the chemistry of superelectrophilic species). The goal of this work was to study the reactions of 3-arylpropynenitriles with arenes under the action of the strong Lewis acids, aluminum halogenides AlX3 (X = Cl, Br) and the Brønsted superacid TfOH (CF3SO3H).

It was found that acetylene nitriles 1a–c reacted with arenes in the presence of excess AlBr3 (6 equiv) at room temperature for 0.5–2 h to afford E,Z-3,3-diarylpropenenitriles 2a–o as products of the regioselective hydroarylation of the acetylene bond (Scheme 1). These reactions proceeded only with an excess of AlBr3 (6 equiv). Thus, running the reaction of nitrile 1a with benzene under the action of less amount AlBr3 (1–4 equiv) resulted in an incomplete conversion of the starting compound 1a and a low yield of the target product 2a (<10%).

The yields of the compounds 2 were moderate (20–64%) that may be caused by possible transformations of the nitrile group in the electrophilic medium leading to oligomeric material [22]. The reaction proceeded rather regioselectively giving mainly Z-isomers of nitriles 2, as products of an anti-addition of hydrogen and the aryl group to the carbon–carbon triple bond. Only in three cases, mixtures of E,Z-isomers (2b,l,n) in a ratio of ≈1:1 were obtained. The E,Z-configuration of compounds 2a–o was determined by NOESY correlations between the vinyl proton and the aromatic protons or methyl groups in neighboring aryl substituents (see Supporting Information File 1). However, the configuration of nitrile 2o was unclear. Benzene, o-, m-, p-xylenes, and 1,2,4-trimethylbenzene (mesitylene) were included in the hydroarylation of nitriles 1. Reactions of nitriles 1a–c with o-xylene led to the formation of regioisomers derived from the electrophilic substitution at different positions of this arene. Thus, nitrile 1a gave two types of regioisomers 2n and 2o. After reactions of nitriles 1b,c with o-xylene, compounds 2l and 2m correspondingly were obtained; other regioisomers were not isolated in amounts that were high enough for their identification.

This transformation was also tested with another strong Lewis acid, aluminum chloride (AlCl3), for the reaction of nitrile 1a with benzene. However, in this case, mainly oligomeric material was obtained and the yield of the target reaction product 2a was lower (20%) than in the same reaction with AlBr3. This result revealed the less effectiveness of AlCl3 for the hydroarylation of nitriles 1.

One may propose the following reaction mechanism (Scheme 2). The coordination of AlBr3 to both the nitrile and acetylene bonds of the starting compound 1 furnishes the highly electrophilic species A bearing a positive charge on the acetylenic carbon atom C3. The subsequent reaction of species A with the arene molecule via electrophilic aromatic substitution results in the formation of species B. The most probably, this stage proceeds stereoselectively due to spatial factors, with the incoming arene Ar′H attacking the acetylene bond in an anti-position to the bulky AlBr3, that determines the final predominant formation of the mainly anti-hydroarylation products of the starting nitriles 1. At the last step of the reaction, a proton substitutes AlBr3, and final hydrolysis of the reaction mixture gives rise to nitriles 2.

Additionally, the cyclization of two selected nitriles 2c,g into 3-arylindanones 3a,b correspondingly was carried out in triflic acid TfOH (CF3SO3H) at room temperature for 1 h (Scheme 3). The intramolecular aromatic substitution by the electrophilically activated nitrile group took place in the more electron-rich methylated aryl ring. A similar cyclization of 3,3-diarylpropanenitriles into 3-arylindanones in TfOH was described by us previously [17]. It should be specially emphasized that the synthesis of indenones is an important goal in organic chemistry since this structural motif is associated with interesting chemical and biological properties [27-32].

We also conducted reactions of nitriles 1a–c with arenes in TfOH at room temperature, which, however, led to complex mixtures of reaction products. Only in the cases of the reaction of nitriles 1a,b with benzene in TfOH, the hydrophenylation products, i.e., nitriles 2a,b, were obtained (Scheme 4; compare with synthesis of 2a,b in Scheme 1).

We have developed a novel transition-metal (Pd, Pt, Rh, etc.)-free procedure for the regio- and stereoselective hydroarylation of the carbon–carbon triple bond in 3-arylpropynenitriles by arenes under electrophilic activation by aluminum bromide AlBr3. The obtained 3,3-diarylpropenenitriles were cyclized into 3-arylindenones in triflic acid CF3SO3H (TfOH).

© 2021 Gorbunova et al.; licensee Beilstein-Institut.
This is an Open Access article under the terms of the Creative Commons Attribution License (https://creativecommons.org/licenses/by/4.0). Please note that the reuse, redistribution and reproduction in particular requires that the author(s) and source are credited and that individual graphics may be subject to special legal provisions.
The license is subject to the Beilstein Journal of Organic Chemistry terms and conditions: (https://www.beilstein-journals.org/bjoc/terms) 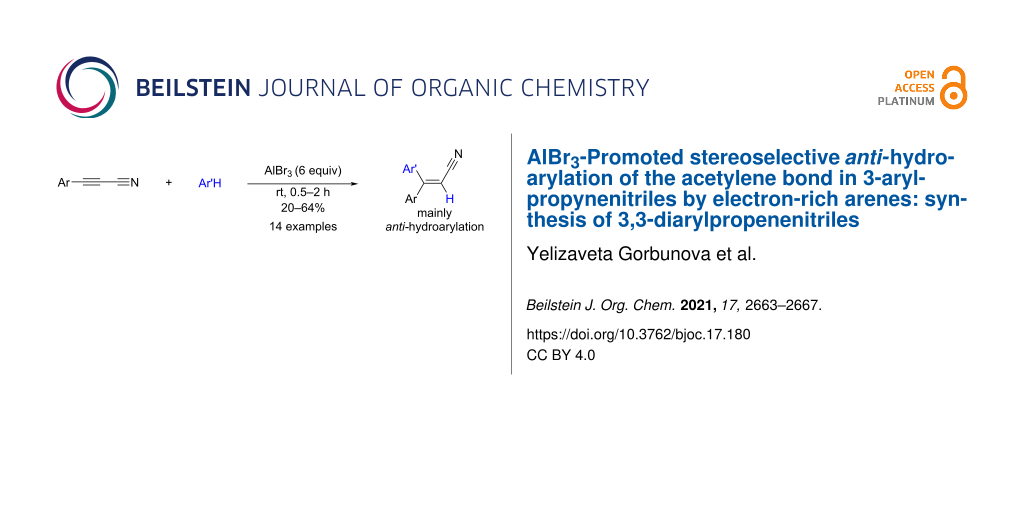