Analogs of the carotane antibiotic fulvoferruginin from submerged cultures of a Thai Marasmius sp.


All articles from this author
Leon Kaysan


All articles from this author
Rémy B. Teponno

A recent find of a Marasmius species in Northern Thailand led to the isolation of five unprecedented derivatives of the carotane antibiotic fulvoferruginin (1), fulvoferruginins B–F (2–6). The structures of these sesquiterpenoids were elucidated using HRESIMS, 1D and 2D NMR, as well as CD spectroscopy. Assessing the bioactivity, fulvoferruginin emerged as a potent cytotoxic agent of potential pharmaceutical interest.

The family Marasmiaceae (Agaricomycetes, Basidiomycota) presently contains ten genera with Marasmius Fr. being the predominant one (currently comprising over 600 recognized species). Most of these fungi are considered saprotrophs, even though some (e.g., Moniliophthora species) are plant pathogens [1]. They are rather ubiquitous, but have been frequently overlooked owing to the small dimensions of their basidiomes. As of now, their taxonomy is not well settled, and a world monograph using modern mycological methodology is still not available.

As of 2006, the family forms a sister taxon to the Omphalotaceae within the suborder of Marasmiineae (Agaricales) [2,3]. Among Basidiomycota, the Marasmiineae are most famous for their abundant chemical diversity. Metabolites with various bioactivities described from Marasmius spp. include the cryptoporic acids [4], marasmals, marasmones, and oreadones [5,6], the caryophyllane hebelophyllene C [7], and the carotane fulvoferruginin (1) [8] (Figure 1). The latter is the only known secondary metabolite from M. fulvoferrugineus Gilliam and displays a modest antibiotic and moderate antifungal activity. A recent find of a Marasmius species in Northern Thailand led, however, to the isolation and identification of five novel derivatives of this carotane-type sesquiterpenoid. The present study is dedicated to describing their isolation, and biological and physicochemical characterization.

Structure elucidation of the secondary metabolites 2–6

Preparative HPLC of the supernatant crude extract of a submerged cultivation of Marasmius sp. strain MFLUCC 14-0681 in ZM½ media led to the isolation of six carotane sesquiterpenoids, fulvoferruginins A–F (1–6, Figure 1).

Fulvoferruginin E (5), isolated as a clear solid, shares the same molecular formula C15H22O4 as compound 2, as deduced from the HRESIMS spectrum also exhibiting a protonated molecular ion peak at m/z 267.1589 [M + H]+. Its 1D/2D NMR spectroscopic data are similar to those of metabolite 4, with the only striking variation being the replacement of two olefinic methines (C-1/C-2) with methylenes (C-1: δC 41.0, C-2: δC 31.7). The absence of this double bond has previously been observed in the structurally related hercynolactone from the liverworts Barbilophozia lycopodioides and B. hatcheri [9].

To add to this, another metabolite, fulvoferruginin F (6), with a molecular formula of C15H20O3 was isolated that is also lacking the double bond at C-1/C-2. It further possesses an additional double bond between C-10/C-11, just like hercynolactone. However, NMR data analysis disclosed that the position C-9 (δC 70.8) is hydroxylated. The ROESY spectrum indicates H-9 (δH 4.88) to be cofacial with H-5 and H-13. Thus, fulvoferruginin F could also be named 9-hydroxyhercynolactone [9].

Assessing the bioactivity of the fulvoferruginins A–F (1–6), aside from the known antifungal activity of fulvoferruginin (1), no other antimicrobial activities were observed (Table S2 in Supporting Information File 1). All metabolites were also tested against the murine fibroblast cell line L929 and the cervix carcinoma cell line KB3.1. While all metabolites exhibited very weak cytotoxic effects at the highest concentration, only 2, 4, and 6 displayed mild cytotoxicity, allowing for a determination of IC50 values, which ranged from 9.5–32 µg/mL. To our surprise, fulvoferruginin (1) displayed greater cytotoxic effects than previously reported (though for other cell lines) [8], which led us to assess its cytotoxicity further against different carcinoma cell lines. The IC50 values of compound 1 range from 0.06–0.7 µg/mL for all tested cell lines (Table S2 in Supporting Information File 1).

The lack of bioactivity for metabolites 2–6 can be attributed to an absence of the α-methylene lactone unit present in fulvoferruginin (1). Nevertheless, the cytotoxicity detected here for fulvoferruginin shows that re-evaluating the bioactivity of previously isolated basidiomycete metabolites in different bioassays can lead to unexpected results of potential pharmaceutical interest.

Klein et al. obtained a crystal structure of fulvoferruginin (1) [8], as did Huneck et al. for hercynolactone [9], verifying their relative configuration. Huo et al. have further confirmed the absolute configuration of compound 1 by utilizing the CD exciton chirality method. Additionally, our recorded CD spectra (Figure S1 in Supporting Information File 1) of metabolites 3 and 4, are in close agreement with 1. As the metabolites 2–6 displayed analogous relative stereochemistry and optical rotations, we presume that the new compounds arise from the same biosynthetic genes as the parent compound, and postulate that the congeners should also have the same absolute configuration as compound 1 [10].

For a long time, fulvoferruginin was only known to be produced by a strain of M. fulvoferrugineus found in Northern America, but there is a recent report on the occurrence of fulvoferruginin (1) in a basidiomycete collected in China. This strain was tentatively identified as Gymnopus sp. through analysis of its internal transcribed spacer (ITS1-5.8s) rDNA region [10]. Today, Gymnopus belongs to the Omphalotaceae and some Marasmius species have been reassigned to Gymnopus, as have certain Gymnopus spp. to genera like Marasmiellus. However, intensive phylogenetic studies on these genera remain to be conducted. A macroscopic differentiation to Marasmius is difficult and a taxonomic classification based on ITS alone has proven to be insufficient for these genera [11]. In addition, the recent finding that multiple copies of the rDNA can be present in one and the same genome of certain fungi, leading to up to more than 10% deviations [12], makes us suspicious about the validity of the previous classification of the Chinese “Gymnopus” species.

Taking also other marker loci into consideration, as is required for publishing a new fungal species [12], Marasmius sp. MFLUCC14-0681 currently displays the largest identity (BLASTn) to a European M. haematocephalus (98.9%), a Brazilian M. conchiformis, and M. purpureostriatus. Nevertheless, all species are genetically distinct. Considering other rDNA regions currently leads to more questions than answers regarding the phylogeny and clearly shows the need for further taxonomic re-evaluation.

Isolation and identification of fungal material

Basidiomes of strain MFLUCC 14-0681 were collected and isolated by B.T. close to the Mushroom Research Center in Chiang Mai Province, Thailand (http://www.mushroomresearchcentre.com) on August 11, 2014. The species was identified as a Marasmius sp. by mycologists B.T. and M.S. based on its morphological characteristics and cultures were verified by rDNA sequence comparison [5.8S gene region, the internal transcribed spacer 1 and 2 (ITS) and the large subunit (LSU)]. Sequence data are deposited with GenBank, under accession number MN150126 for ITS and MN150183 for LSU. The collected, dried specimen as well as corresponding cultures were deposited at the mycological herbarium of Mae Fah Luang University, Chiang Rai, Thailand, accession number MFLUCC 14-0681.

Fermentation and isolation of metabolites 1–6

We are highly grateful to A. Skiba, W. Collisi, C. Kakoschke, and C. Bergmann for excellent technical support.

B.S. and F.S. are grateful for financial support from the Deutsche Forschungsgemeinschaft (DFG) for grant SU 936/1-1. The German Academic Exchange Service (DAAD) and the Thai Royal Golden Jubilee-Industry Program (RGJ) for a joint TRF/DAAD PPP (2014-2015) academic exchange grant to M.S. and F.S. and the RGJ for a personal grant to B.T. (No. Ph.D./0138/2553 in 4.S.MF/53/A.3) are also gratefully acknowledged. The Alexander von Humboldt Foundation is acknowledged for its financial support to R.B.T.

Glycosylated coumarins, flavonoids, lignans and phenylpropanoids from Wikstroemia nutans and their biological activities

Chemical constituents of Chaenomeles sinensis twigs and their biological activity

© 2021 Sandargo et al.; licensee Beilstein-Institut.
This is an Open Access article under the terms of the Creative Commons Attribution License (https://creativecommons.org/licenses/by/4.0). Please note that the reuse, redistribution and reproduction in particular requires that the author(s) and source are credited and that individual graphics may be subject to special legal provisions.
The license is subject to the Beilstein Journal of Organic Chemistry terms and conditions: (https://www.beilstein-journals.org/bjoc/terms) 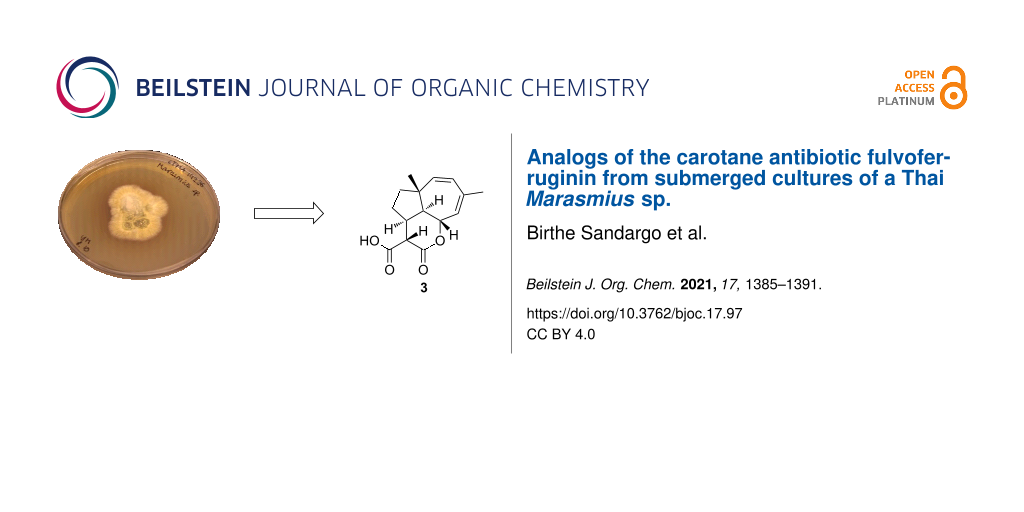