All articles from this author
Thierry Milcent


All articles from this author
Sandrine Ongeri


All articles from this author
Benoit Crousse

Trifluoromethyl propargylamines react with various azide derivatives to afford 1,4-disubstituted 1,2,3-triazoles through a Huisgen 1,3-dipolar cycloaddition. The reaction is catalyzed by a Cu(I) species in acetonitrile, and the corresponding products are obtained in good yields. This process thus offers an entry to new trifluoromethyl peptidomimetics as interesting scaffolds.

The 1,2,3-triazole system has widespread uses, and it has been considered as an interesting component in terms of biological activity [1-5]. Although the use of heterocyclic moieties in peptidomimetics has been widely reported [6], the application of 1,2,3-triazoles in the field of conformational studies has occurred only recently [7-13]. In particular, Angelo and co-workers [8,12] reported the synthesis of triazole foldamers able to adopt specific protein-like conformations. On the other hand, it is well known that the introduction of fluorine atoms or a fluoroalkyl group can greatly modify the physico-chemical features and thus the biological properties of a molecule (resistance to metabolic oxidation and hydrolysis, modification of pKa, hydrophobicity,...) [14-17]. Furthermore, the development of CF3-containing scaffolds has gained a real interest especially in the peptidomimetic area [18-21]. In continuation of our interest in the synthesis of original trifluoromethyl compounds [22-26], and in order to study the influence of trifluoromethyl groups on the conformation of peptidomimetics, we decided to explore the preparation of trifluoromethyl triazole derivatives. Herein we turn our attention to the synthesis of new triazoles from trifluoromethyl propargylamines using the Huisgen 1,3-dipolar cycloaddition [27-29].

The synthetic approach depicted in Scheme 1 shows that the desired compounds could be easily obtained via a 1,3-dipolar cycloaddition from the corresponding propargylamines which are obtained using an efficient procedure from the trifluoromethyl imines previously described by our group [30-32].

The copper(I)-catalyzed 1,3-dipolar cycloaddition [33-38] of organic azides and alkynes (also called “click chemistry”) resulting in the formation of 1,2,3-triazoles has become an increasingly attractive area [39]. According to the literature [33-38], the Cu(I) species can be used directly (e.g. CuI), or generated by oxidation of a Cu(0) or reduction of a Cu(II) species. Catalysis by the CuI is known to yield exclusively the 1,4-disubstituted regioisomer [33,34]. First, the N-(p-methoxyphenyl)-1-(trifluoromethyl)propargylamine was reacted with benzyl azide in the presence of CuI (10 mol%) and showed good reactivity with completion of the reaction within 24 h, whereas the use of CuSO4/Na ascorbate afforded the cycloadduct in low yield. The reaction was then carried out with different propargylamines (N-(p-methoxyphenyl) and N-benzyl) and various azides at room temperature in acetonitrile within 24 h which afforded the compounds 2a-i with good yields (63-92%) after purification by column chromatography. The results are summarized in Table 1.

As expected the new triazoles were formed in a fully regioselective manner affording the 1,4-regioisomer as highlighted from NOE experiments on compound 2c (Figure 1). A strong correlation was observed between the hydrogen Ha and Hb respectively. The structure of the other compounds 2a-i was assigned by analogy with 2c.

In our goal to study the influence of the CF3 group on the conformation of peptidomimetics, we applied our strategy to the enantiopure trifluoromethyl-propargylamine 3 bearing the removable (R)-phenylglycinol chiral auxiliary (Scheme 2) [30-32].

The reaction was carried out under the same condition with azidoacetic acid methyl ester and afforded the cycloadduct 4 in good yield (79%) and as a single isomer without any racemization. This compound can easily afford the free amino ester which is a promising trifluoromethyl building block for the synthesis of new triazole-based trifluoromethyl oligomers.

In summary, this paper describes the synthesis of new trifluoromethyl triazole scaffolds from readily accessible propargylamines and azides through a copper (I) catalyzed 1,3-dipolar cycloaddition. The triazole derivatives were obtained in good yields and will be useful intermediates for further synthesis of new fluorinated foldamers and their conformational feature studies.

© 2008 Martinelli et al; licensee Beilstein-Institut.
This is an Open Access article under the terms of the Creative Commons Attribution License (http://creativecommons.org/licenses/by/2.0), which permits unrestricted use, distribution, and reproduction in any medium, provided the original work is properly cited.
The license is subject to the Beilstein Journal of Organic Chemistry terms and conditions: (http://www.beilstein-journals.org/bjoc) 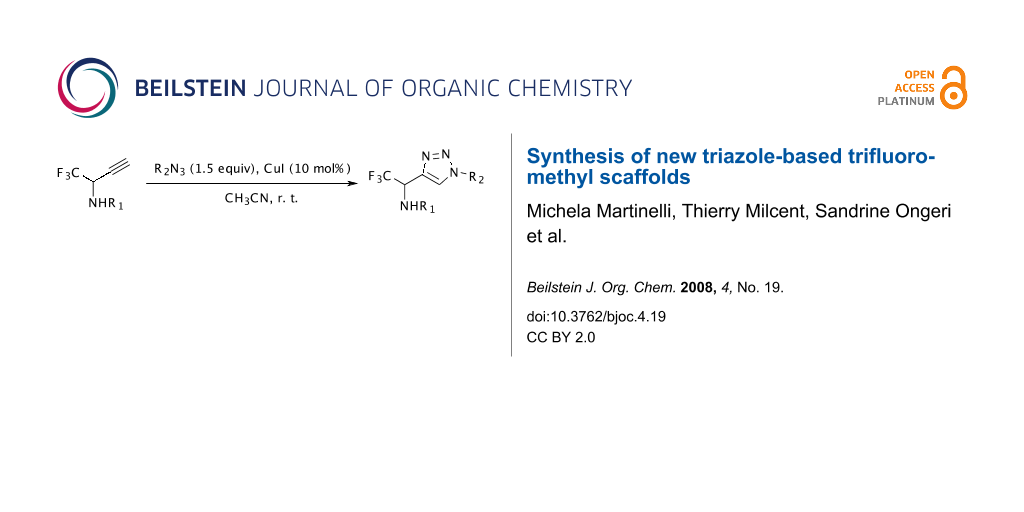