All articles from this author
Yutian Shao


All articles from this author
Kang Li


All articles from this author
Wujiong Xia

A new selaginellin named selaginellin O (1), along with three other known selaginellins (2–4) were isolated from Selaginella tamariscina (Beauv.) Spring. On the basis of spectroscopic analysis, the structure of selaginellin O was demonstrated to be 4-[(4’-hydroxy-4-formyl-3-((4-hydroxyphenyl)ethynyl)biphenyl-2-yl)(4-hydroxyphenyl)methylene]cyclohexa-2,5-dien-1-one. Compound 1, 2 and 3 exhibited appreciable cytotoxic activity against cultured HeLa cells (human cervical carcinoma cells), as well as significant antioxidant activity.

There are about 700 species of the genus Selaginella (family selaginellacea) widely found in the world, with more than 50 species being found in China [1]. Twenty of them are widely used in Chinese folk medicine, most frequently employed for the treatment of cancer, cardiovascular problems, hepatitis, gastritis, hematuria, diabetes, and skin diseases [2]. Selaginella tamariscina (Beauv.) Spring is one of the two qualified species listed in Chinese Pharmacopoeia that has long been used as a traditional Chinese medicine for promoting blood circulation [3]. Phytochemical and pharmacological studies on genus Selaginella led to identifications of numerous bioactive compounds, including biflavonoids, alkaloids, and lignans, with broad biological activities, including antivirus, antifungal, antibacterial, cytotoxic, and anti-inflammatory properties [4-20]. In the past five years, more than 10 selaginellins (novel pigments with a unique para-quinone methide and alkynylphenol carbon skeleton) have been isolated from several Selaginella species in China [13-20]. Selaginellin derivatives have been hitherto found only in genus Selaginella. In the course of our phytochemical investigations on Selaginella tamariscina (Beauv.) Spring, four selaginellin derivatives (Figure 1), namely selaginellin M (2) [20], selaginellin (3) [13], selaginellin A (4) [14], and a new analogue selaginellin O (1), were isolated from the entire plant. Herein, we report the isolation and structural elucidation of these selaginellin derivatives, as well as the evaluation of their bioactivities.

a400 MHz, acetone-d6, δ in parts per million, J in hertz. bOverlapping signals.

The chemical structures of selaginellin M (2), selaginellin (3) and selaginellin A (4) were identified by spectral analysis by 1D and 2D NMR spectroscopy and high-resolution MS. Their 1H and 13C NMR data were assigned in Table 2.

Over the past few decades, considerable biochemical, physiological and pharmacological evidence has accumulated to support the hypothesis that free-radical-mediated oxidative processes are implicated in various human diseases. The role of free radicals in ageing, in cancer, and in cardiovascular, neurodegenerative and other diseases is more and more widely accepted [21,22]. Antioxidants are attracting increasing scientific and clinical attention.

The current pharmacological evidence shows that antioxidant treatment may significantly inhibit atherosclerosis, which indicates that selaginallins may be partly related to the herbal use of S. tamariscina for promoting blood circulation and eliminating blood stasis [24].

Plant material. The herb of Selaginella tamariscina was purchased from Tongtai Medicine, Harbin Co. Ltd., China. The material was authenticated by Prof. Zhenyue Wang, Heilongjiang University of Chinese Medicine. A voucher specimen (No. 200705JB) was deposited in the Lab of Applied Organic Chemistry, Harbin Institute of Technology.

Cytotoxicity assay. Due to insufficient material, selaginellin O (1), selaginellin M (2) and selaginellin (3), were evaluated for their cytotoxic activity against cultured human cervical carcinoma HeLa cells by using the MTT [3-(4,5-dimethylthiazol-2-yl)-2,5-diphenyltetrazolium bromide] colorimetric method [25]. The anticancer agent cisplatin was used as a positive control. The cytotoxicity data were expressed as IC50 (half inhibition concentration) values.

ABTS radical scavenging assay. The assay was performed according to the established protocol [26]. The ABTS•+ radical was generated by mixing 7 mM aqueous ABTS solution with 2.45 mM potassium persulfate solution (final concentration) followed by incubation in the dark at room temperature for 16 h. The resultant ABTS•+ solution was diluted with ethanol to give an absorbance of 0.70 ± 0.02 at 734 nm and equilibrated at 30 °C. After the addition of 2.85 mL of diluted ABTS•+ solution to 0.15 mL of different concentrations of samples in ethanol, the absorbance reading was taken at 30 °C, exactly 6 min after the initial mixing. The percentage inhibition of absorbance at 734 nm was calculated and plotted as a function of the concentration of samples and of Trolox as standard. The antioxidant activities are expressed as the IC50 value.

FRAP (Ferric reducing antioxidant power) assay. This assay was carried out following the procedure described previously with modifications [27]. FRAP reagent was prepared fresh by mixing 10 mM TPTZ, 20 mM FeCl3 and 300 mM acetate buffer (pH 3.6) in a 1:1:10 (v/v/v) ratio and warmed to 37 °C before use. A 0.2 mL amount of the sample including Trolox as a reference compound in methanol was added to 1.8 mL freshly prepared FRAP reagent and then incubated at 37 °C for 8 min. Absorbance of the resulting FeII-TPTZ (ferrous-tripyridyltriazine) complex was measured at 595 nm. Antioxidant power was expressed as micromolar FeII-TPTZ equivalents, calculated from a calibration curve prepared with various concentrations of FeSO4.

© 2012 Yang et al; licensee Beilstein-Institut.
This is an Open Access article under the terms of the Creative Commons Attribution License (http://creativecommons.org/licenses/by/2.0), which permits unrestricted use, distribution, and reproduction in any medium, provided the original work is properly cited.
The license is subject to the Beilstein Journal of Organic Chemistry terms and conditions: (http://www.beilstein-journals.org/bjoc) 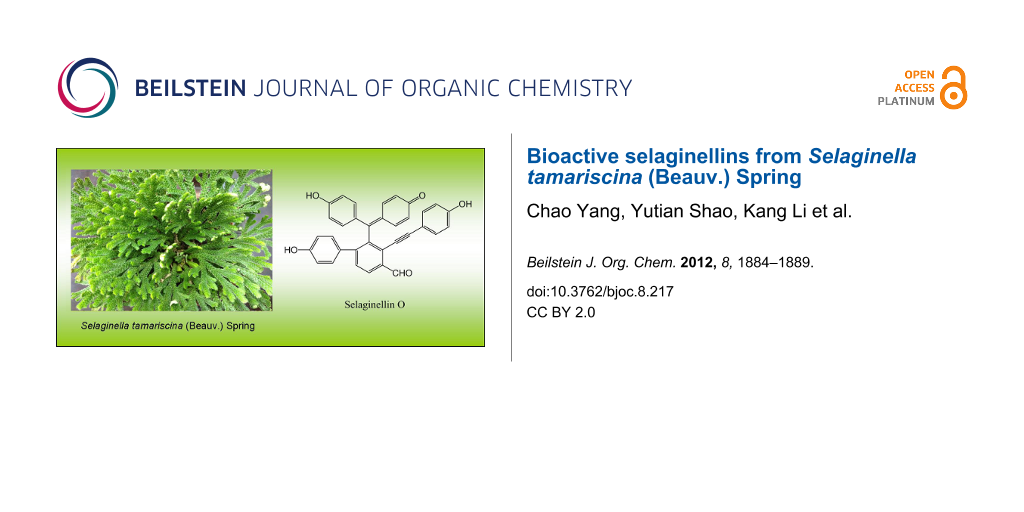