Selective and eco-friendly procedures for the synthesis of benzimidazole derivatives. The role of the Er(OTf)3 catalyst in the reaction selectivity


All articles from this author
Jorge G. Uranga


All articles from this author
Mónica Nardi


All articles from this author
Antonio Procopio


All articles from this author
Daniel A. Wunderlin


All articles from this author
Ana N. Santiago

An improved and greener protocol for the synthesis of benzimidazole derivatives, starting from o-phenylenediamine, with different aldehydes is reported. Double-condensation products were selectively obtained when Er(OTf)3 was used as the catalyst in the presence of electron-rich aldehydes. Conversely, the formation of mono-condensation products was the preferred path in absence of this catalyst. One of the major advantages of these reactions was the formation of a single product, avoiding extensive isolation and purification of products, which is frequently associated with these reactions.

Theoretical calculations helped to understand the different reactivity established for these reactions. Thus, we found that the charge density on the oxygen of the carbonyl group has a significant impact on the reaction pathway. For instance, electron-rich aldehydes better coordinate to the catalyst, which favours the addition of the amine group to the carbonyl group, therefore facilitating the formation of double-condensation products.

Reactions with aliphatic or aromatic aldehydes were possible, without using organic solvents and in a one-pot procedure with short reaction time (2–5 min), affording single products in excellent yields (75–99%). This convenient and eco-friendly methodology offers numerous benefits with respect to other protocols reported for similar compounds.

The formation of heterocyclic compounds is a very important task in organic synthesis, mainly because they are present in numerous biologically active compounds and in several natural products [1]. Among them the presence of benzimidazole [2-7] or benzothiazole [8,9] rings in numerous compounds is an important structural element for their biological and medical applications. For example benzimidazoles are widely spread in antiulcer, antihypertensive, antiviral, antifungal, anticancer, and antihistaminic medicines, among others [10-12].

Therefore, the main drawbacks of current protocols for the synthesis of benzimidazoles include the use of expensive reagents, difficulties in the preparation of the catalyst, long reaction times, a narrow scope of substrates, tedious work-up procedures, the use of hazardous organic solvents and lack of selectivity [15-21].

Rare earth metals are economical and readily available from commercial sources and represent useful catalysts in organic synthesis [22]. In particular, erbium(III) promotes environmentally friendly reactions [23-25], and has been successfully applied to the synthesis of natural products [26-28]. For instance, an efficient method for the synthesis of a wide range of 3,3-dimethyl-11-alkyl, or aryl 2,3,4,5-tetrahydro-1H-dibenzo[b,e][1,4]diazepin-1-ones was reported using erbium(III) trifluoromethanesulfonate, Er(OTf)3 as catalyst. The reaction comprises a one-pot condensation between o-phenylenediamine and 5,5-dimethylcyclohexane-1,3-dione, followed by a Er(OTf)3-catalyzed cyclization with diverse alkyl- or arylcarbonyl chlorides [29,30].

In view of these previous applications, our main goal was the development of an environmentally friendly synthetic method, to obtain different derivatives containing the benzimidazole core by a one-pot reaction. Additionally, Er(OTf)3 was selected as the catalyst to achieve the selective formation of products in order to avoid tedious work-up and product separation procedures. Moreover, differences in reactivity were investigated by by means of theoretical calculations.

Table 1 summarizes these results, comparing our current results with other catalysts previously used in the synthesis of benzimidazole derivatives. For instance, the reaction of o-phenylenediamine with aromatic aldehydes using sodium dodecyl sulfate (SDS) as the catalyst gave 1b in 98% yield. However, the yields were low using aliphatic aldehydes together with SDS as catalyst (Table 1, entry 16) [31]. Conversely, good to moderate yields were observed in reactions between benzaldehyde and o-phenylenediamine catalyzed by lanthanum (LaCl3) [32], SiO2/ZnCl2 [33], polymeric resin-bound hexafluorophosphate ion (PHP) [15], perchloric acid adsorbed on silica gel (HClO4–SiO2) [16], polystyrene sulfonic acid [34], HSO3Cl in 2-propanol [35], trimethylsilyl chloride (TMSCl) [36], or Amberlite (IR-120) [37]. It is worth mentioning that these previously reported catalysts required longer reaction times than those used in our current protocol (Table 1, entries 17–24). Moreover, although other methods are quite satisfactory with regards to reaction yield, many of them were carried out at high temperatures, or require expensive catalysts. Furthermore, several previously reported reactions employed organic solvents, which are not environmentally friendly. Thereby, we propose the use of Er(OTf)3 as catalyst to provide an eco-friendly, economical and easy to work-up procedure for the synthesis of 1,2-disubstituted benzimidazoles, which can be afforded in only two minutes.

Several reactions between benzaldehyde and o-phenylenediamine to obtain 2-phenyl-1H-benzimidazole (1a) are known. However, they afforded moderate yields requiring longer reaction times in the presence of air (Table 1, entries 27 and 28) [38,39]. Product 1a was also obtained in a shorter reaction time using hypervalent iodine as oxidant and dioxane as solvent [40,41] or in the presence of [Ru(bpy)3Cl2] or Ir(dfppy)2(phen)PF6 as catalysts [42] (Table 1, entries 29–31). The major disadvantage of these methods, however, is the cost of these catalysts.

Thus, comparing previous reports with our current method, it is concluded that the use of Er(OTf)3 as catalyst provides many advantages over previous ones such as it makes use of an economical, eco-friendly and recyclable catalyst, excellent yields in short reaction times, a simple procedure, short reaction times, and an easy work-up.

In addition to the above mentioned advantages we observed that erbium is not involved in the formation of 1a, but it catalyzes the formation of 1b. The mechanism for the formation of 1b using lanthanum catalysts (LaCl3) was reported by Zhang et al. [32]. Considering all the evidences, and the essential role of Er(OTf)3 on the selectivity between 1a and 1b observed in this work, two reaction pathways are proposed and shown in Scheme 2: (i) through bisimine rearrangement (path i) and (ii) through a monoamine cyclocondensation–aminal/immonium rearrangement (path ii).

In path i, when the aldehyde approaches Er(OTf)3, the carbonyl carbon of the aldehyde becomes highly reactive toward the nucleophilic attack of o-phenylenediamine, generating dibenzylidenediamine I. Consequently, the 1,2-disubstituted benzimidazole (b) will be formed through bisimine II, under catalytic action of the Lewis acid Er(OTf)3. Thus, the catalyst acts as an effective electrophilic activating agent for the formation of the bisimine and promotes the subsequent steps (intramolecular nucleophilic attack and the following 1,3-hydride shift), finally affording the 1,2-disubstituted imidazoles (b).

In contrast, path ii is a non-catalyzed reaction. In path ii, when the diamine reacts with the aldehyde, a monoimine III is formed. The latter intermediate undergoes an intramolecular nucleophilic attack on the C=N, leading to the formation of the imidazoline intermediate IV. This intermediate finally affords 2-substituted benzimidazole 1a. Thus, the presence of erbium determines the reaction pathway (either i or ii), controlling the selective formation of 1,2-disubstituted vs 2-substituted benzimidazole. It is worth to remark that the presence of the carbonyl hydrogen in the aldehyde is necessary for the formation of the benzimidazole core. On the contrary, the reaction of the diamine with ketones affords benzodiazepine as products [29,30].

Next, we investigated the general applicability of our method in the reaction of o-phenylenediamine with several substituted aldehydes using the optimized conditions towards products 1a or 1b, respectively. For this, the best conditions to selectively obtain the double-condensation product 1b (Table 1, entry 10) were chosen and a family of 1,2-disubstituted benzimidazoles was successfully synthesized. The results are listed in Table 2.

aGeneral reaction conditions: 1 mmol of benzaldehyde and 0.5 mmol of o-phenylenediamine, 10 mol % of Er(OTf)3 under conventional heating at 80 °C for the indicated time. bWith 9% of 1a. cWith 15% of 2a. dWith 17% of 3a. eWith 4% of 4a. fWith 2% of 5a. gProduct b was not detected. Similar yields were obtained without catalyst.

The reactions of o-phenylenediamine with electron-rich aldehydes, such as 4-CH3OC6H4CHO, 4-CH3C6H4CHO, CH3CH2CHO, CH3CHO and 4-C6H5-CH2CHO (Table 2, entries 2–6) afforded the corresponding 1,2-disubstituted benzimidazoles 2b–7b in good yields (over 83%) under the optimized conditions. However when aldehydes containing electron-withdrawing groups, such as 4-ClC6H4CHO, 4-NO2C6H4CHO and 4-CNC6H4CHO were used, unexpected products were observed (Table 2, entries 7–9). Instead of double-condensation products b, the corresponding mono-condensation products 7a–9a were formed in excellent yields. The same products were obtained in comparable yields without the use of catalyst.

These results clearly show that the electronic effects of the substituents present in the aldehydes play a significant role in the reaction pathway. The 1,2-disubstituted benzimidazoles were obtained when electron-rich aldehydes were used, while 2-monosubstituted benzimidazoles were obtained from the reaction with electron-deficient aldehydes under the same conditions.

To shed light on this observation, we decided to carry out theoretical calculations, using the BPW91 functional at 6-31+G* level, as implemented in Gaussian 09 [43]. In order to evaluate the effect of the substituent on the reactivity of aldehydes, we used a molecular descriptor based on the electronic properties of the carbonyl group. These properties could determinate the affinity between the aldehyde and the catalyst.

Next the selectivity towards the mono-condensation products a was investigated (Table 3) using the best conditions identified for the synthesis of 2-phenylbenzimidazole (1a, Table 1, entry 21). As it can be seen from Table 3, good reaction yields (>80%) were obtained with aldehydes containing both, electron-donating groups (Table 3, entries 2–6) and electron-withdrawing groups (Table 3, entries 7-8) at low temperature using short reactions times. Thus, the new procedure is highly versatile for the selective synthesis of 2-substituted benzimidazoles of general type a.

The observed different reactivity, leading to the formation of either mono- or double-condensation products, was explained on the basis of calculated charge densities located on the carbonyl group that is necessary for the coordination of the catalyst. We suggest that the calculated charge densities on the oxygen could indicate the reactivity of these aldehydes. Moreover, the theoretical results predict that a charge density on the oxygen higher than −0.52 favors the coordination to the catalyst, therefore affording double-condensation products, which is in full agreement with the experimental results of this work.

© 2016 Herrera Cano et al.; licensee Beilstein-Institut.
This is an Open Access article under the terms of the Creative Commons Attribution License (http://creativecommons.org/licenses/by/4.0), which permits unrestricted use, distribution, and reproduction in any medium, provided the original work is properly cited.
The license is subject to the Beilstein Journal of Organic Chemistry terms and conditions: (http://www.beilstein-journals.org/bjoc) 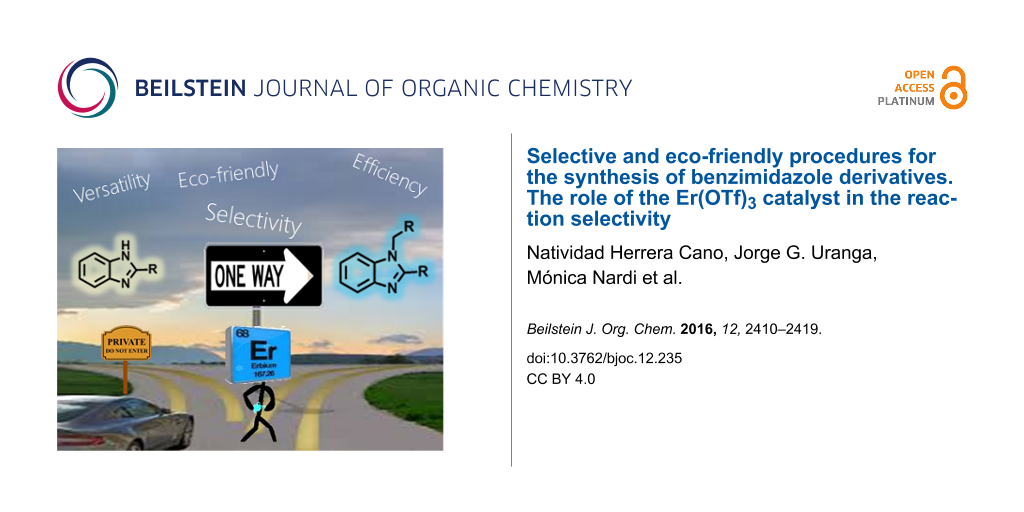