Biosynthetic origin of butyrolactol A, an antifungal polyketide produced by a marine-derived Streptomyces


All articles from this author
Hisayuki Komaki


All articles from this author
Yasuhiro Igarashi

Butyrolactol A is an antifungal polyketide of Streptomyces bearing an uncommon tert-butyl starter unit and a polyol system in which eight hydroxy/acyloxy carbons are contiguously connected. Except for its congener butyrolactol B, there exist no structurally related natural products to date. In this study, inspired by our previous genomic analysis, incorporation of 13C- and 2H-labeled precursors into butyrolactol A was investigated. Based on the labeling pattern and sequencing analytical data, we confirmed that the tert-butyl group is derived from valine and its C-methylation with methionine and the polyol carbons are derived from a glycolysis intermediate, possibly hydroxymalonyl-ACP.

Actinomycetes produce structurally diverse secondary metabolites with pharmaceutically useful bioactivities. Importantly, members of the genus Streptomyces have been the main source of drug discovery programs due to their high capacity in secondary metabolism including polyketides, peptides, terpenoids, alkaloids, and amino acid/carbohydrate/nucleic acid derivatives [1,2]. One of the largest groups of bacterial secondary metabolites is polyketide from which a range of clinically used drugs have been developed. Polyketides still remain in the focus of drug development because of their structural complexity that can provide attractive templates for new pharmacophores [3]. While the frequency of discovering new skeletons from actinomycetes seems declining, biosynthetic analysis of structurally unique known compounds and the following bioengineering of biosynthetic genes are currently becoming an essential part of the creation of new drug-like structures [4-8].

Butyrolactol A (1) is an antifungal polyketide first isolated from Streptomyces rochei S785-16 [9] (Figure 1). The left half of 1 is the hydrophobic unconjugated tetraene system including one Z-olefin with a terminal tert-butyl group, whereas the hydrophilic polyol system bearing a γ-lactone terminus constitutes the right half of the molecule. To date, no structurally related natural products are known except for its demethyl congener butyrolactol B that was also isolated from the same strain and has an isopropyl group instead of the tert-butyl terminus [9]. Very recently, isolation of butyrolactols C and D was presented but the details are not available in public domains [10]. 1 has a broad antimicrobial activity against fungi ranging from Candida albicans to Trichophyton mentagrophytes with comparative activity to nystatin [9]. Despite the uniqueness of the structure and the antifungal potency, no further research has been reported for 1.

There are two interesting aspects in the structure of butyrolactol A (1). First, among the polyketides, a tert-butyl group has been found exclusively in metabolites of marine cyanobacteria except for 1 [11-14] (Figure 2). Although no experimental evidence is available, pivaloyl-CoA (2,2-dimethylpropanoyl-CoA) is supposed to be a starter for its biosynthesis [15]. Additionally, trimethylation of malonyl-CoA is proposed for the synthesis of the tert-butyl starter in the biosynthesis of apratoxin A [16]. Another intriguing feature of this molecule is the highly oxygenated carbon chain in which eight hydroxy groups, one of which is used for lactone formation, are contiguously aligned. A 1,3-diol is a common structural element in aliphatic polyketides because the incorporation of malonate-precursors gives rise to the alternative alignment of the methylene and the oxygenated carbons. Meanwhile, a 1,2-diol in polyketides is known to be formed by hydroxylation of methylene carbons as seen in the biosynthesis of erythromycin or amphotericin B [17,18]. The contiguously hydroxylated carbon chain of 1 is quite unusual as a polyketide. Examples of similar but shorter polyol carbon chains are ossamycin [19], IB-96212 [20], and antifungalmycin [21], all of which are the secondary metabolites of actinomycetes (Figure 3).

In our investigation on secondary metabolites of marine actinomycetes, butyrolactol A (1) was found to be produced by a Streptomyces strain collected from deep sea water of the Toyama Bay, Japan. In order to get insight into the construction of the above-mentioned unusual structures, we performed an in silico analysis of the biosynthetic genes of 1 through draft genome sequencing and proposed its biosynthetic pathway [22]. In this study, biosynthetic precursors of 1 were investigated for further genetic and enzymatic studies.

aThe 13C signal intensity of each peak in labeled 1 divided by that of the corresponding signal in unlabeled 1, respectively, normalized to give an enrichment ratio of 1 for the unenriched C-2 peak.

According to the incorporation result of the doubly labeled acetate, malonyl-CoA is not the extender unit for the lactone (C-1 to C-4) and the pentaol (C-5 to C-9) moieties (Figure 3), suggesting that the contiguous polyol system is not formed by methylene hydroxylation. Another possible pathway for 1,2-diol formation is the incorporation of hydroxymalonyl-ACP from a glycolytic intermediate for chain elongation [23]. To investigate this possibility, we conducted a feeding experiment of [U-13C6]glucose which could label carbons derived from malonyl-CoA and hydroxymalonyl-ACP. In the 13C NMR spectrum, 13C–13C couplings were observed for C-1/C-2, C-3/C-4, C-5/C-6, C-7/C-8 in addition to the carbon pairs C-11/C-12, C-13/C-14, C-15/C-16, C-17/C-18, C-19/C-20, and C-21/C-22 (Table 1, Figure S3 in Supporting Information File 1). The 2D-INADEQUATE spectrum showed cross peaks for the above-mentioned two-carbon units derived from the glycolytic degradation of [U-13C6]glucose (Table 1, Figure 4b). Combined with the acetate-labeling result, this labeling pattern suggested that the carbons from C-1 to C-8 are derived from hydroxymalonyl-ACP. This conclusion is supported by the sequencing analysis of the gene cluster for butyrolactol biosynthesis (Figure 5, Table 2). Four genes coding homologues of enzymes involved in hydroxymalonyl-ACP formation in the zwittermicin biosynthesis (ZmaN, ZmaD, ZmaG, and ZmaE) (Figure 6) [24] are present in the downstream of the butyrolactol PKS cluster. Genes coding for O-methyltransferase homologues responsible for O-methylation of hydroxymalonyl-ACP were not found near the cluster. Hydroxymalonyl-ACP was first identified as an unusual polyketide extender for zittermicin from Bacillus cereus [25]. The occurrence of this uncommon extender unit is limited to some bacterial species Bacillus [25,26], Xenorhabdus [27], Paenibacillus [28], and Streptomyces [29,30].

Methylmalonyl-CoA was readily predicted as the origin of the methyl-branched three-carbon fragment (C-9/C-10/C-28). Actually, intense enhancement of the C-9 carbon signal was observed by feeding of [1-13C]propionate (Table 1). The remaining carbons not labeled by malonate-type precursors were the terminal tert-butyl carbons (C-23 to C-27). The origin of the tert-butyl group in polyketide biosynthesis is still unknown, however, the tert-butyl functionality of bottromycin and polytheonamide was shown to be produced by radical C-methylation of the isopropyl group of valine [31,32]. By analogy, the tert-butyl portion of 1 was most likely supplied through the C-methylation of valine. To examine this possibility, feeding experiments of L-[methyl-13C]methionine and L-valine-d8 were carried out. As expected, the tert-butylmethyl carbons (C-25, C-26, C-27) were labeled as a result of L-[methyl-13C]methionine incorporation (Table 1). In addition, the 2H (deuterium) NMR spectrum showed deuterium signals for the methyl group (H-25, H-26, H-27) of L-valine-d8-labeled 1 (Figure 7a). The mass spectrum of the L-valine-d8-labeled 1 displayed the molecular ion with a mass increment of 6 Da (Figure 7b), corresponding to the incorporation of six deuterium atoms into the terminal methyl groups. Based on these results from precursor-feeding experiments, we concluded that the tert-butyl group and the adjacent methylene carbon (C-23) are derived from valine and the S-methyl carbon of methionine. It is controversial whether pivaloyl CoA is loaded onto the ACP as a starter or isobutyl-CoA is used as a starter and C-methylation takes place afterwards. The signature sequence region of the acyltransferase domain of the PKS starter loading module for butyrolactol biosynthesis (FAGHS) shares some amino acid residues with the known loading module of isobutyl CoA (bafilomycin: LAAHS [33], α-lipomycin: LAAHS [34], tautomycin: LAAHS [35]). Meanwhile, it is known that the substrate recognition is not strict for the loading module of avermectin (VPAHS) [36] and myxalamide (VAVHS) [37] which accept both isobutyl-CoA and 2-methylbutyl-CoA. In addition, genes coding for C-methyltransferase are not present near the butyrolactol PKS genes. Further enzymatic studies are necessary to establish the order of the starter loading/C-methylation events.

In summary, we elucidated the biosynthetic origin of butyrolactol A (1) on the basis of the feeding experiments of isotope-labeled precursors in combination with the bioinformatics analysis of its biosynthetic genes. The overall result of labeling experiments is summarized in Figure 8. The tert-butyl group was shown to be derived from the C-methylated isopropyl group of valine. This is the first study that experimentally identified the precursor of a tert-butyl group in a polyketide backbone. The unusual contiguous polyol system comprising eight hydroxylated carbons was proved to be arising from the chain extension using hydroxymalonyl-ACP by labeling experiments of [1,2-13C2]acetate and [U-13C6]glucose. This conclusion is consistent with our previous bioinformatic prediction that suggested the presence of genes necessary for the supply of hydroxymalonyl-ACP adjacent to the PKS gene cluster of the butyrolactol biosynthesis. The results obtained in this study provide useful information for further biosynthetic studies and genome mining of structurally unique/novel secondary metabolites.

Sodium [1,2-13C2]acetate and L-valine-d8 were purchased from Cambridge Isotope Laboratories, Inc. [U-13C6]Glucose, sodium [1-13C]propionate, and L-[methyl-13C]methionine were purchased from Sigma-Aldrich Co. LLC. 1H and 13C NMR spectra were obtained on a Bruker AVANCE 500 spectrometer in DMSO-d6 using the signal of the residual solvent signals (δH 2.50, δC 40.0) as an internal standard. The 2H NMR spectrum was obtained on a Bruker AVANCE 500 spectrometer in DMSO. Chemical shifts were referenced to the solvent signal (δH(D) 2.50). ESITOFMS were recorded on a Bruker microTOF focus.

Incorporation of 13C- and 2H-labeled precursors

Feeding experiments were performed for sodium [1,2-13C2]acetate, [U-13C6]glucose, sodium [1-13C]propionate, L-[methyl-13C]methionine, and L-valine-d8. Inoculation, cultivation, and purification were performed in the same manner as described above. Addition of 13C- and 2H-labeled precursors was initiated at 48 h after inoculation and periodically carried out every 24 h for four times. After further incubation for 24 h, the cultures were extracted with 1-butanol.

© 2017 Harunari et al.; licensee Beilstein-Institut.
This is an Open Access article under the terms of the Creative Commons Attribution License (http://creativecommons.org/licenses/by/4.0), which permits unrestricted use, distribution, and reproduction in any medium, provided the original work is properly cited.
The license is subject to the Beilstein Journal of Organic Chemistry terms and conditions: (http://www.beilstein-journals.org/bjoc) 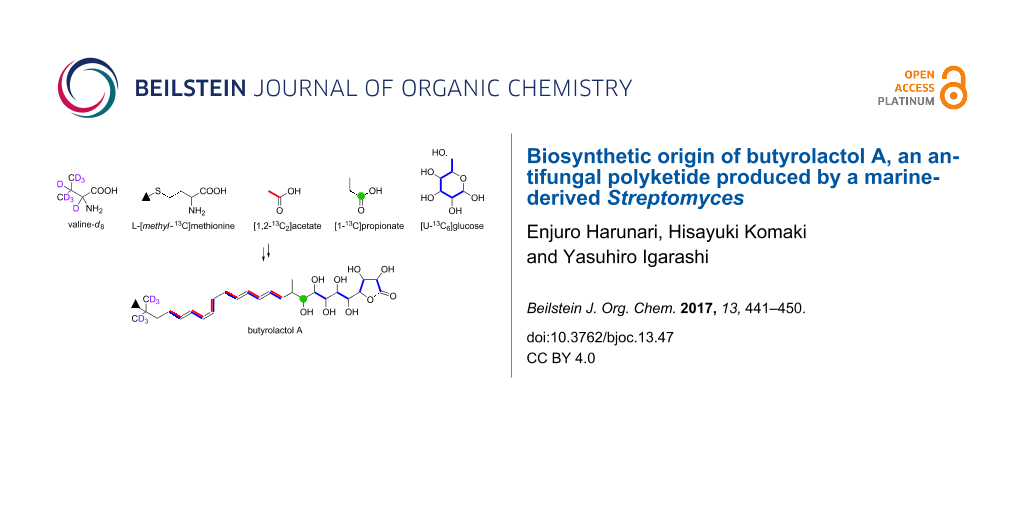