Two years have now passed since the publication of the first Thematic Series on gold catalysis for organic synthesis in this journal. In the intervening time, the pace of progress and discovery in the field has continued unabated. Many of these advancements are exemplified in the more than twenty contributions that have been collected in this second Thematic Series. The articles demonstrate the power of gold catalysis for the construction of complex structures, including the development of tandem processes, the expedient synthesis of heterocyclic structures, and applications to the synthesis of complex natural products. The field has also witnessed growth through the discovery of other modes of reactivity. For example, gold-catalyzed cycloaddition reactions, enantioselective catalysis, or oxidative transformations catalyzed by gold complexes have featured prominently.

Gold-catalyzed intermolecular coupling of sulfonylacetylene with allyl ethers: [3,3]- and [1,3]-rearrangements 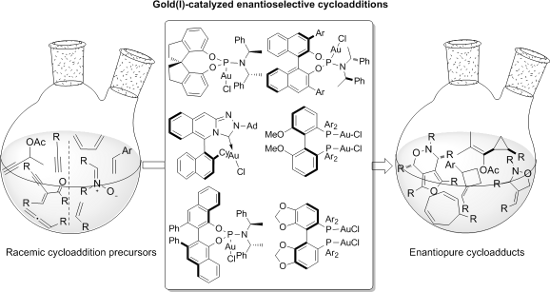 Synthetic scope and DFT analysis of the chiral binap–gold(I) complex-catalyzed 1,3-dipolar cycloaddition of azlactones with alkenes

Gold(I)-catalyzed domino cyclization for the synthesis of polyaromatic heterocycles